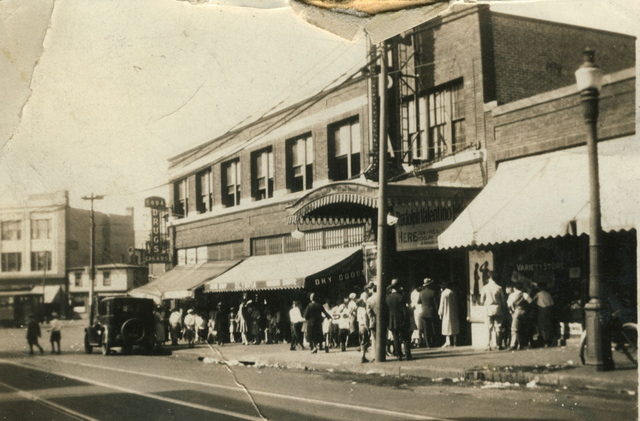 Located on Westminster Street at Olneyville Square. A balconied neighborhood theatre in the Olneyville section of Providence opened on September 5, 1926 with Florence Vidor in “The Grand Duchess and the Waiter”. It survived into the 1950’s and had installed CinemaScope before closing and being razed that same decade to make way for a low-income residence building.

“Is this site now the "Olney Towers” high rise?“
Yes, it is.

From Temples of Illusion by Roger Brett, about Jacob Conn’s building of the Olympia Theatre:

“Shortly after leasing the Weybosset Street house [Gaiety] and changing its name to Conn’s City Theater, he built Conn’s Olympia Theater in Olneyville Square. This edifice included an office block and in it he installed a radio station, WCOT. All this he accomplished in 1926 and 1927. By now he considered Olneyville to be his personal fief, his base of power…”

Here is a set of some recently found photos of the Olympia dating to 1926, around the time of its opening and during a presentation of a Valentino film following the death of the star. They are the first photos of the Olympia that I have ever seen. Thanks to theatre owner Jacob Conn’s great-granddaughter Laura Frommer.
OLYMPIA SET

This newspaper ad appeared the day of the theatre’s opening, September 5, 1926. The first films shown were the silents The Grand Duchess and the Waiter, with Florence Vidor and Adolphe Menjou, and The Runaway, with Clara Bow and Warner Baxter. Admission prices ranged from 10 cents to 25 cents. Reference is made to the theatre’s organ. A photo of owner-builder Jacob Conn appears in the ad.

This newspaper ad from September 19, 1926, a few weeks after the Olympia first opened, promotes a film with Rudolph Valentino, who had recently died.

NEWSPAPER ARTICLE on the opening of the Olympia in September 1926 with photo of owner, Captain Jacob Conn.

A Facebook friend of mine wrote about walking to the Olympia with family members from up on Hartford Avenue. He said, “There were 6 of us siblings that would go together. For 25 cents each we would see the a cartoon at the beginning, then the Newsreel, two feature movies and then another couple of cartoons and then we would collect a piece of dinnerware until my mother had enough for our family of 13."

Gerald, as you are the most frequent contributor to pages for Providence theaters maybe you can solve this puzzle. I found this item in The Moving Picture World of October 21, 1922:

“Fred Lovett, manager of the Palace in the Olneyville section of Providence, believes in seeing every picture before booking it. The result has been that this house has been consistently making money, while similar houses who have booked on hearsay, have had a somewhat up and down career.”

As we don’t have a Palace Theatre listed in Olneyville, I’m puzzled. Are Cinema Treasures' listings missing a theater? Did the magazine get the location wrong, or the name? Is Palace a missing aka for one of the other theaters in the neighborhood? I don’t know what to make of it.

Joe Vogel: The only theatre that would make sense is the Royal. I don’t know of any Palace in Olneyville. There were short-lived storefront operations, most of which had disappeared by that time. Either he is referring to the Royal or else to a Palace I never read anything about and never saw in any listing or ad from that time.