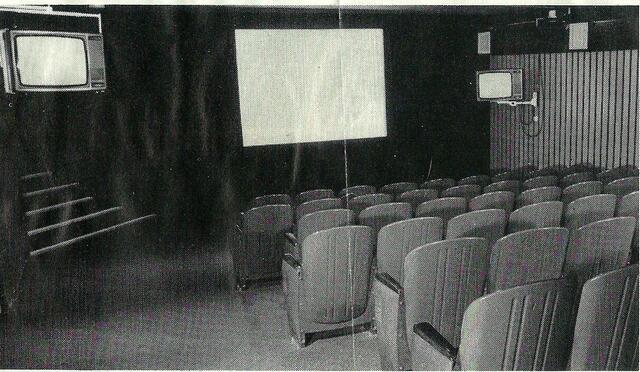 The Midland Group of Artists was established in Nottingham in 1943. Its first gallery occupied one room, at 38 Bridlesmith Gate. After several moves the Group settled at 11 E. Circus Street from 1961 to 1977. Throughout the 1960’s, it provided “a forum for progressive and experimental visual arts in Nottingham”.

In 1976, with the aid of a series of Arts Council grants, the Group re-located to new premises in the Lace Market district of Nottingham, leasing a property at Carlton Street from Nottingham City Council. This became known officially as The East Midlands Centre for Contemporary Arts, though the Midland Group name persisted.

The move officially took place in October 1977, although the new premises only became usable in stages as various parts of the building were renovated and refurbished, creating spaces for administration, exhibitions, performance and cinema. There was a roof terrace, bar and shop.

The cinema element, the New Cinema, opened in February 1980. Aside from film projection equipment, there were facilities for TV screenings and video. The initial film season, which ran to May, showcased Ireland, Chile and feminism in film, and also the traditions of fantasy and horror that run through British cinema. It also provided an outlet for work produced by filmmakers at the in-house Film Production Workshop, and by others throughout the region. The New Cinema was made possible with the help of a grant from the British Film Institute. Although its address was Carlton Street, access to the cinema was via an entrance on Warser Gate, which ran behind the building.

Once established in its new home, the Group was regrettably short-lived. When it dissolved in 1987, the New Cinema was merged with the Nottingham Film Theatre, based at the Broadway Cinema (see separate Cinema Treasures entry), to become City Lights Cinema.

It seems that government spending cuts and problematic management regimes were the main causes of the Midland Group’s demise.