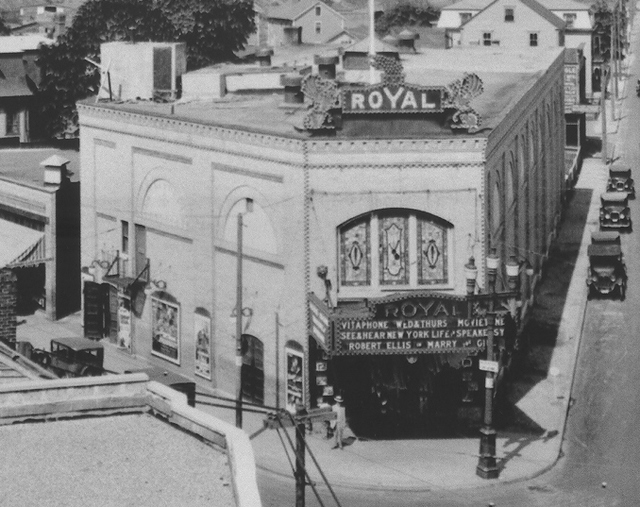 Opened on October 27, 1914, this neighborhood theatre in the Olneyville section of Providence showed movies until 1934 when it shut down. It may have re-opened for a brief time afterwards. It seems the building remained unused right through the 1940’s and 1950’s, except that the lobby was used as a fruit and vegetable market for a while.

Around the beginning of the 1960’s or perhaps just earlier, the theatre was razed to make way for a gas station.

This theatre was part of the September 1923 6th Paramount Week. In this advertisement from the (Providence) Evening Tribune, September 1, 1923, we see a fascinating list of Rhode Island area theatres, many long-gone and long-forgoten, or even unheard of, as well as what they were showing during that week. CLICK HERE and move text to see all theatres.

In September 1920, this theatre was part of the celebration of the 3rd annual Paramount Week. CLICK HERE for all participating RI area theatres and the titles of the films shown.

Article in The Providence News, October 24, 1919, on the sixth anniversary of the opening of the Royal Theatre on October 26, 1913.
Lots of background on the theatre is contained here, including the addition to the building that raised seating capacity from 900 to 1500.
ARTICLE

ERROR!
The above newspaper article refers to a 1913 opening. Actually the theatre opened a year later on October 26, 1914. 1919 was the fifth aniversary, not the sixth.

Lights out in 1919!!!
RESOURCEFUL MANAGER uses headlights from two cars to light theatre.

The collected records of the Royal Theatre, dating from 1914 to about 1935, are available for study purposes at the Brown University Library in Providence. https://brown.as.atlas-sys.com/repositories/2/resources/328

I never saw the actual interior of this theatre, since it was shuttered before I was born. I do remember being dropped off by the crosstown city bus from La Salle Academy on the Plainfield Street side of the long-closed theatre to await my Thornton or Hughesdale bus to get to my home in Johnston after school in 1956-1957 and perhaps later. Students from Mount Pleasant High School would also be waiting here to transfer to another bus. Even earlier however, before and after 1952, I remember walking with my mother into the former lobby of the Royal, which was then being used by a fruit and vegetable vendor. I would help her carry her purchases. I also remember the doors to the auditorium. They were on the left, perhaps after two or three steps. Looking back, I wish I had had a camera to photograph that portion of the interior. For some reason this theatre, more than any other lost theatre of Providence, has haunted my memories. Strange.

The Royal Theatre first opened on Tuesday, October 27, 1914, per a notice in The Olneyville Times.