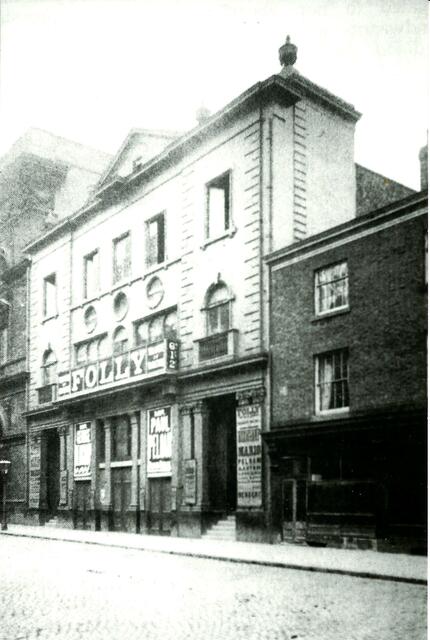 In Manchester city centre, on a site adjacent to the Free Trade Hall, stood a Methodist Chapel. On 18th November 1865 this was converted into the Alexandra Music Hall. On 3rd November 1879 Edward Garcia acquired it and re-named it the Folly Theatre of Varieties. One of the ‘variety’ offerings was the Adolphe Langfriers Cinematographe.

On 6th December 1897 following alterations to the exterior, it was re-named the Tivoli Theatre of Varieties. It operated under that name until October 1921, when live shows ended.

The Winter Gardens Cinema continued until New Year’s Day 1927, when it was severely damaged by fire. Most of the seating was destroyed and the lead roof and part of the walls fell away. With repairs estimated at £25,000, it was decided it would not be re-built. However, it was not until February 1936 before the remains were finally cleared away.