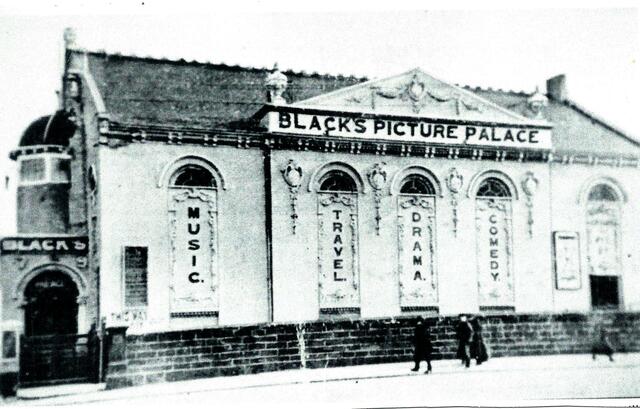 Situated in the Monkwearmouth district of Sunderland, Monkwearmouth Picture Hall opened in the 1871-72 built St. Stephen’s Presbyterian Church on 14th May 1906 “for a short season”. The opening film was “Dick Turpin’s Ride to York”, famous as the first British one-reel feature film.

This was the first permanent cinema opened by George Black Snr, whose sons, after his death in 1910, would come to dominate the cinema scene in the North East.

He settled in Sunderland after touring with a waxworks show, which is believed to include brief interludes on film. Some sources suggest he initially set up his waxworks in this building, but this has not been corroborated.

After initially closing on 28th July 1906, the Hall re-opened on 3rd September 1906. By late-November the shows were being advertised, patriotically, as “Black’s British Animated Pictures”.

In July 1907 the Hall closed for redecoration and re-seating, possibly replacing the old church pews. Re-opening, the Hall continued until the end of the “present season” on 18th July 1908. After a summer closure, the Hall re-opened on 3rd August 1908. It was renamed Black’s Picture Palace on 24th December 1910.

In October 1916 the Black Brothers' lease expired and they moved out. The Oliver family picked up the lease and, after “extensive alterations” (it was still, presumably, a largely unaltered church), there was a Grand Re-Opening, on 25th December 1916, for the Bridge Cinema, the main feature being “One Touch of Nature”.

James Broughton and William Revell Marshall took over in January 1918, renaming it the Bromarsh Grand Cinema, after themselves.

On 24th May 1943, after showing “49th Parallel”, starring Leslie Howard, the Bromarsh Grand Cinema was badly damaged by German bombing. It never re-opened.