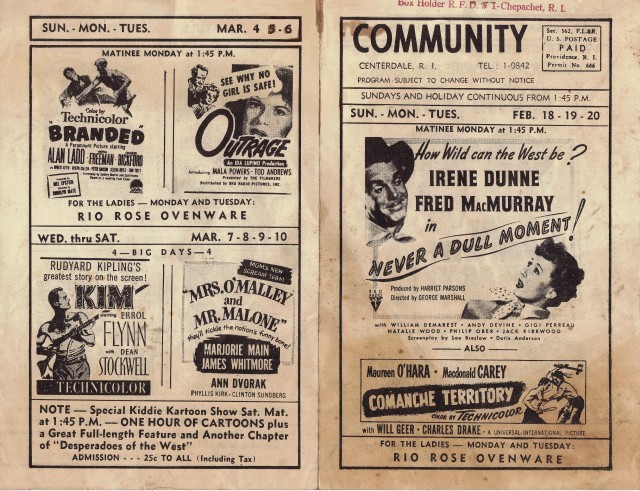 This theatre in North Providence’s Centredale section was for many decades the only theatre in the town. Now there are none since it was torn down over twenty years ago after a fire. It may have started existence under the name Trahan’s Theatre. At the end of its career it was the Hillside Cinema…and was showing weekly programs of Italian films of the popular ethnic type.

The Providence Journal of July 5, 1976, reported that the theatre, named Hillside at the time, had been destroyed by fire. The article said:

“Kenneth Guarino, president of K.I.M. Realty,…Providence, said his firm bought the building two months ago and was in the process of renovating it to make it a family theater again.

“For years, the theater, near the intersection of Waterman Avenue and Smith Street, was known as the Community Theatre. For a brief period after the theater closed, about 10 years ago, it was used as an indoor golf enterprise.

“Guarino said extensive renovations were made to restore the interior of the building. He said the renovation included a new screen and sound system, air conditioning, seating facilities and a new vestibule area near the entrance.

“The building, constructed in 1926, formerly housed a dental office on a portion of the second floor and also contained a small variety store on the first floor next to the entrance.”

In the years 1974 & 1975 (perhaps earlier and later too?) the Hillside was used for showing Italian films on Sundays. Imputazione per uno studente with Massimo Ranieri played February 2, 1974. Pensando a te played the following Sunday. Ads had unnamed second features. On October 19, 1975 I saw a double bill f La monaca di Monza with Il segno del leone. These films were run by Rolando Petrella of the Italian radio program “La Voce d'Italia” on radio station WRIB. He had run the programs at the Italy Cinema in Johnston and in other venues.

This theatre was within walking distance of my Providence home when I was a child. I saw Help! there more times than I care to admit, with hundreds of other screaming teens and pre-teens.

Francis L. Moses was manager of the former Community Theater, Centredale, for more than 25 years, before retiring in 1973.

The Providence Evening Tribune of September 1, 1923 has an ad including a Centredale exhibitor called Centredale Worsted Mills as being part of Paramount Week with a showing of the film Moran of the Lady Letty. Could that have been the same place as the Casino or Strand in Centredale? Or were those two, both listed elsewhere with a Smith Street address, actually the same place? Or was this merely a mill showing for workers and their families? Perhaps even at the Community Theatre? Perhaps someone can straighten out the history of film exhibition in Centredale.
PARAMOUNT WEEK AD

I am working on a new post to “blog” based on my mother’s letters home to Germany in 1934. She mentions seeing “Women in Uniform” and laments that it was “[not] especially great,” saying, “Maybe I did not understand the English well enough.” Oddly your post is the only reference I have to an English version other than some subtitled or much later remakes. If you have

I won’t post that letter until August 6, but the blog, “Trudel’s Truth” with her earlier letters is at http://wp.me/1yA95

The letters are at Trudel’s Truth. My mother makes numerous references to movies she saw during the period and I am trying to link to YouTubes or other info about each one.

around 1976, when my friend Todd and I were 9, we rode our bikes down to this theater as it had just been demolished, we climbed the hill behind it and snuck into the rubble and threw seats around at each other…I remember it being a pile of broken cement and theatre seats, and felt bad because I loved movies as a kid. it was right by the post office on the short part of Smith where it meets Waterman Avenue. I think it was replaced by a parking lot….