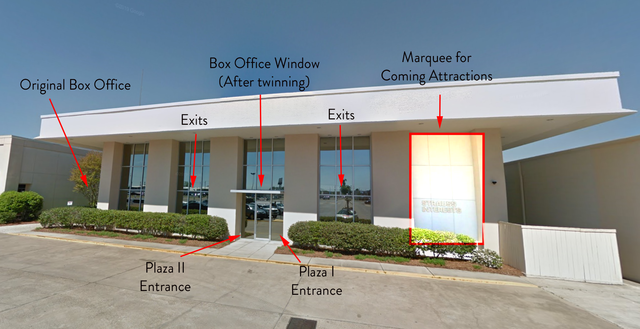 The Twin City Shopping Center opened in the late-1950’s as an open air shopping center. In the 1960’s, the first enclosed mall in the area was built adjacent to the center. The Twin City Mall opened with anchors Montgomery Ward and local department store, Selber Brothers. On August 13, 1970 a ‘gala red carpet opening’ of the Plaza Theatre was held and the opening attraction was “Airport” starring Burt Lancaster. The Plaza Theater was a single screen theatre and advertised as a ‘Visterama’ theatre. The auditorium was on a steeply raked single floor. The walls and screen were covered with gold metallic curtains. There was a large foyer which also served as a smoking area.

The Plaza Theatre was closed around 1985.

The following is based on my personal knowledge of the Plaza Theatre from working there as assistant manager in the early 80’s, and research from archived editions of the Monroe News Star on newspapers.com. While newspaper.com was a valuable resource, they don’t have every single issue, so issues on dates where articles may have appeared that would have announced the construction of the theatre, technical details, or grand opening events, are not available.

Twin City Shopping Center opened near the end of the 1950s as an open air shopping center. In the 1960s, the first enclosed mall in the area was built adjacent to the center. Twin City Mall opened with anchors Montgomery Ward and local department store, Selber Brothers. On Thursday, August 13, 1970 a “gala red carpet opening” was held for the Plaza Theatre and its opening attraction, “Airport”. The Plaza was a single-screen theatre and advertised as a Vistarama theatre.1 The auditorium was on single floor with a steeply raked auditorium with the walls and screen covered with gold metallic curtains. In addition to the two main aisles that ran between the center section and the left and right sections, there were also outer aisles to accommodate additional exit doors on either side of the auditorium. There was a large foyer behind the back row that was originally used as a smoking section. The foyer, along with the aisles were carpeted in the ABC/Plitt popcorn pattern. I worked at the Plaza after it was twinned and remember capacity for Plaza 1 was about 375 and Plaza II was around 225, so my best guest as a single screen would put capacity between 625-675. None of the grand opening ads mention the operating company, but I assume it was ABC-Midsouth (later ABC Interstate/Plitt Southern). I couldn’t find any information about the original sound system or screen size, but the screen was deeply curved as you could still see the holes in the floor where the original frame was anchored.

The lobby had terracotta floor tile and ran almost the entire width of the theatre. The doors to the ladies and gentlemen’s restrooms were tucked away on the other side of the lobby; ladies on the left and the men’s to the right. The small concession stand sat directly between the two auditorium doors. You entered the stand from inside the auditorium via a tiny half-door and if you stood up too soon, you would scrape your back on the door frame. There was a storage room in the corner where the drink syrup tanks and marquee letters were stored, but most of the overstock for the concession stand was kept upstairs.

On July 1, 1977, the Plaza Theatre re-opened as a twin with Star Wars in Plaza 1 and A Bridge Too Far in Plaza 2. (The ads announcing the split advertise Star Wars was in its second week, so some lucky people got to see it on the huge Vistarama screen.) The gold curtain scheme was kept for both auditoriums and even included curtains. The screen masking was built into the curtains so there was a black “vertical line” down the middle when closed. The projectionist selected either flat or scope on the controls to open the curtains and mask the screen to the proper aspect ratio. Both screens were equipped with mono sound.

The box office and entrance doors were relocated to the front of the theatre. Patrons purchased their tickets outside and entered the door to the left for Plaza II and to the right door for Plaza I. ABC Theatres used turnstiles and tokens instead of tickets, and since there was one set of restrooms for two screens, there was nothing to divide the lobby. On busy nights with R- and PG-rated films playing, we used to have problems with underage patrons sneaking over to the R-rated film. It also caused problems when one side would sell out. People would buy a ticket for the other movie and then sneak over.

Another unique feature of the Plaza lobby was it had curtains in front of the auditorium doors that were used in the daytime. The front of the Plaza faced west and on sunny days, especially mid to late afternoon, sunlight would flood the auditorium when the doors were opened by patrons going to the concessions stand or restrooms. The projection booth was directly above the concession stand and created an overhang that made a perfect spot for the curtains. It wasn’t a perfect solution because even with light-blocking curtains, there was still light that reflected in from the lobby on really bright summer days.

I was in my early 20’s when I worked at the Plaza and have a many fond memories of working there. I remember getting in big trouble from Mr. Furman, the district manager, when I got the auditoriums switched for the opening weekend of Ghostbuster and Gremlins. I didn’t think it was such a big deal because we were sold out all weekend long. Of course the receipts we called in for each film were wrong, so someone up the chain of command had to call the studios to let them know of the mix up. I left the Plaza and Plitt Southern Theatres not long after my auditorium mix up. I had started as usher at the Paramount Theatre in Hot Springs, AR when I was 15 and I was ready for something new. Not long after I left, Plitt was bought out by Cineplex Odeon. It looks like the building is still there and has been repurposed for business offices. I believe the Pecanland Mall and its 10-screen cinema opened in 1985, so I assume the screens went dark at the Plaza, not long after that.

1 - WidescreenMuseum.com lists Vistarama on its One-Hit Wonders page with the following description: Vistarama is a wide-screen system of photography and projection employing an anamorphic “squeeze” lens by which images twice normal width are compressed on regular 35MM and 16MM negatives. Projected through either the Vistarama or other anamorphic projection lens, the picture is spread to an aspect ratio of 1 to 2.55. (1 to 2.66 if shot full aperture.)

Very interesting write up. Like the vast majority of comments regarding theater history and experiences, the story of this place could apply to countless other locations. When built, ABC was just ending their practice of using the great Ultravision projection system in their new construction. Perhaps this Vistarama system, which I have never heard of, was its successor. Several ABC’s of that era had the box office off to the side, and like this one, had it moved to the center when the once fine original auditorium was twinned.

In my experiences with Loews I find several things that are common to this place. Having to pull drapes in front of the auditorium doors to keep out the afternoon sun is something I remember from several theaters. The design of having the concession stand back up to the auditorium under the overhang of the booth is common to all three Loews theaters I worked in as well as one ABC Ultravision location. Having a DM office located in the theater is also a situation I have less than happy memories of. In three of those storerooms were taken over and in another I was evicted from my office and relegated to a closet previously known as the checkout office.

There are two corrections I would make here. First, the Overview states that the theater opened in 1960. That is a typo as it was obviously 1970 since Airport was the opening feature. Second involved the twinning. It is doubtful that the first week of Star Wars played on the Vistarama screen. It is likely that the theater was closed up for the two to four weeks normally associated with a twining project and that it opened one side only with Star Wars. Either the other side was not finished or the release date for A Bridge Too Far was not until the next Friday and they decided not to put some one week filler in to occupy the screen. I worked at an ABC where the second side of a newly built twin opened later for this reason.

It is also possible that they used the Loews system of twinning. In their two Atlanta theaters they twinned they closed for two days and installed a screen in one corner. That was what they used to operate with while the wall was constructed and the screen and booth were set up for the other side. Then they moved to that side and finished up in the other. A check of earlier ads should show a shutdown of 2 days to 2 weeks followed by the opening ad for SW then the twin ad a week later. So, unfortunately, no one got to see Star Wars on the big screen.

Yes, it is now, thanks to the efforts of Ken Roe. Ken is the volunteer editor for CT and takes on the duty of reading every comment and making the necessary corrections. I don’t always agree with the way some of these changes in the overviews are made but he has to work within the parameters set down by the owners of this site. Ken lives in England so it was mid afternoon his time when I made my comment. By the next day the correction in the opening date had been made.

This was a pretty straightforward change. I do wish there was a way to make a designation when changes or additions are made to the overview based on info included in a new comment. That way, the original author of the overview will not be blamed if that new information turns out to be inaccurate. However, that is a small complaint when you think what a mess some of these pages would be if someone were not deleting spam or watching over the tone of some of the comments. Thanks for your efforts Ken.