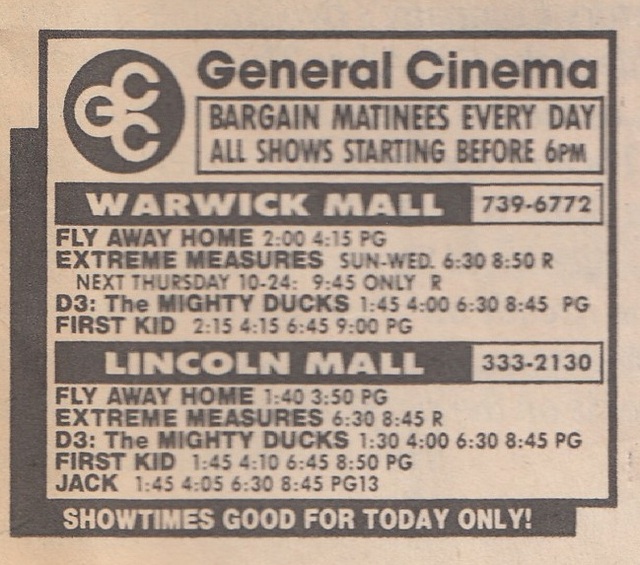 This opened as a twin cinema on April 7, 1971, and it was where many of the major films of the era opened in the Providence area after the downtown Providence theatres closed. I saw “The Exorcist” and “The Godfather” in this theatre. The General Cinema chain also owned the Lincoln Mall Cinemas and Garden City Cinemas, both also gone. One of the two auditoriums was eventually twinned.

The only think I didn’t like about this theatre was that the auditoriums (when they were a twin theatre) had screens that had sort of funnel-like metallic sides. I believe they were grayish. When the left-as-you-enter auditorium was twinned, I believe each then had fixed black masking. There were no curtains and no variable masking in the house. CinemaScope films filled the screen, but in standard aspect-ratio movies, there was a blank area of white screen on either side. As a purist, I’ve always felt that correct screen masking is essential to full enjoyment of what you were watching and part and parcel of a good projection system as much as good focus, brightness, and sound quality.

I wonder if the gray sides were the same metal General Cinema used in all their auditorium sidewalls? Maybe they extended them to the sides of the screens here.

In the 1970s and 1980s, I saw most movies at either the Warwick Mall Cinemas or the Showcase. The downtown movie palaces had closed, and, when the neighborhood theaters were sliced into mini theaters, I stopped going to them. I did make an exception, though, with the Cinerama which sometimes showed a foreign film that I wanted to see.

The Warwick Mall Cinemas closed on January 28, 1999 after the last showings of A Bug’s Life and Mighty Joe Young. It had opened in April of 1971 twenty-eight years earlier. A Providence Journal article from the previous day reported the closing. The Theatre had opened as a two-screener. Later one of the auditoriums was split in two. The seating capacities were 450, 360, and 330.

Last film I caught here was WAR OF THE ROSES in the late 80s.

I have to correct a previous posting – Ed Renden was NOT the manager of Warwick Mall Cinemas, Bill Quarters was. Ed was the manager of Garden City Cinema, then Swansea Mall, and finally Lincoln Mall (all part of the General Cinema chain). After all of those cinemas closed, he went to Showcase Cinemas in Seekonk in the mid-90s.

Sorry for the error, Frank, I confused Lincoln Mall with Warwick. That’s what happens as the years go by…

ed renden i hear is at the showcase seekonk on fall river avenue- he used to work at the small theatre across the street 9-10 before they closed it- he worked with a another manager who was a very good friend of mine who i have lost touched with- wonder where he is now any one know?

I was thinking about this theatre the other day. The Brooklyn Academy of Music revived NIGHT OF THE COMET, which I caught on original release at this theatre back in 1984 when I was back in Warwick for a family visit
.