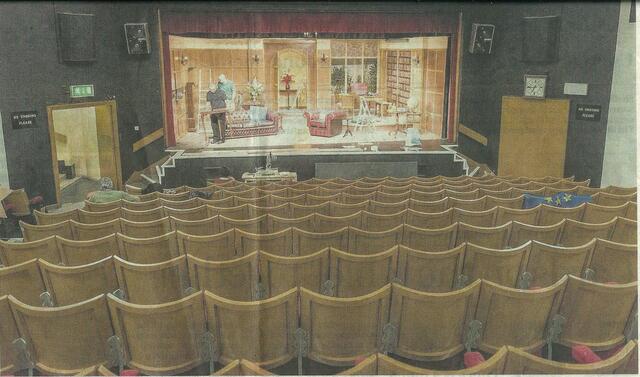 Located inside Sheffield Central Library, the Library Theatre was initially conceived as a lecture hall. It was opened on 5th July 1934 by the Duchess of York, and seated 390 patrons. It was designed by W.G. Davies, the city architect.

It was first used for an amateur dramatic production in November 1934, but difficulties arose when the Inland Revenue ruled it could not be used for any events for which an admission charge was made.

Projection facilities were provided and, in November 1936, “Chapter and Verse”, presumably a documentary, was shown during Sheffield Book Week. Later a number of travel and nature films were shown, but admission was restricted to guests of the sponsoring organisations.

The newly formed Sheffield Film Society held its first meeting in the theatre on 20th November 1937, and programmes of special interest were shown during 1938-39, presumably without charge.

After the war, the Inland Revenue agreed on a separate assessment of the theatre for tax purposes; this allowed shows to be presented that carried an admission charge.

At this time, the dressing rooms were extended/refurbished, as was the stage equipment, and a Bell & Howell 16mm projector was acquired. The theatre was still mainly used by amateur theatrical companies, although monthly documentary programmes were screened from November 1947 to April 1948.

The public response was encouraging, and a second Bell & Howell was installed. Further documentary shows were presented, together with an increasing number of foreign language features: among the first were the French mystery drama “Une femme disparait” (aka “Portrait of a Woman”) and the Italian comedy drama “Quattro passi fra le nuvole” (aka “The Bigamist”).

As film predominated, a pattern developed, with documentaries on Mondays and Tuesdays, a foreign language feature on Wednesdays and Thursdays and an English language film, usually based on a literary work, on Fridays and Saturdays. Admission was free.

This continued until 1960-61, when alterations were carried out which resulted in the ‘playing area’ of the stage being increased from 22ft by 18ft to 26ft by 23ft, new stage and front of house lighting and new seating, more steeply raked to improve sightlines. As a result, the seating capacity was reduced from 390 to 264.

Monthly ‘film weeks’ resumed in January 1962. During the summer, much needed improvements were made to the back stage facilities; when the theatre re-opened that autumn there was no film season, while the amateur dramatic groups took full advantage of these improvements.

Towards the end of 1966, the city council agreed to participate in the British Film Institute’s network of Regional Film Theatres, agreeing that the Library Theatre could be used for some twelve weeks each year.

The BFI provided a grant towards the cost of a new screen, the installation of two 35mm projectors and an illuminated sign at the street entrance.

The Sheffield Film Theatre opened on 10th October 1967 with Kon Ichikawa’s “Alone in the Pacific”, supported by a Canadian documentary, “Sky”. Films played a variety of ‘split weeks’. Initially there were two houses, at 6.15pm and 8.30pm, but this was soon reduced to one 7.30pm show.

For the first seven years, the Film Theatre functioned under a Board of Management, but it was then taken over by a sub-committee of the Libraries and Arts Committee and finally by the Library and Arts Programme Committee.

The final screening at the Film Theatre was Peter Greenaway’s “The Draughtsman’s Contract” on Saturday 9th April 1983. The opportunity had arisen for the Film Theatre programming to be transferred to the Cineplex, on Charter Square, which duly re-opened as the Anvil Civic Cinemas (see separate Cinema Treasures entry).

Into the 1990’s ‘film weeks’ were still presented occasionally at the Library Theatre, but the opening of The Showroom (see separate Cinema Treasures entry) in March 1998 curtailed even those.

Meanwhile, the Library Theatre continues to provide a home for amateur theatre, plus a wide range of other activities.