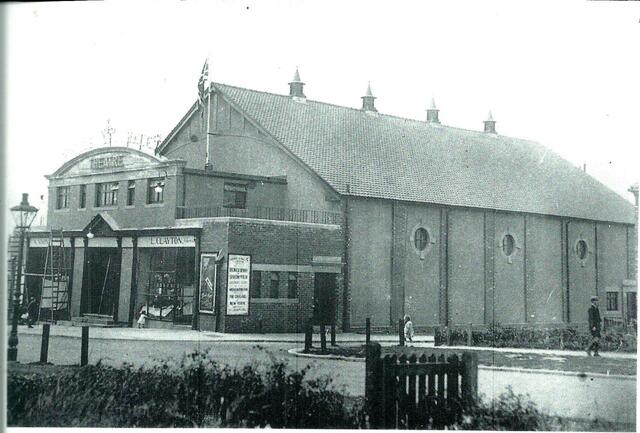 In the Lemington-on-Tyne district, to the west of Newcastle upon Tyne. The Prince of Wales Theatre was opened on 14th July 1924 by Major J. B. Rowell, chairman of Newburn Urban District Council, who said he “was convinced that picture houses had assisted in bringing about less drunkenness”. He hoped “the people of Lemington would flock to the house and in that way support [owner] John Grantham in his good work”.

The cinema’s name had been chosen by a ballot in which 5,000 local people were said to have taken part. It was built on a stadium design, with 534 seats in the stalls and 256 in the ‘balcony’, separated only by a barrier. There was a small stage and an orchestra pit.

The opening films were “Sporting Youth”, starring Reginald Denny, and William Desmond in “The Phantom Fortune”, supported by a song and dance act, Leeburn’s Seven Stars.

Unusually, the cinema opened on Sundays, drawing patrons from areas of the city where Sunday opening was not permitted.

By 1927 a Cinephone sound system had been installed. This was later changed to a Western Electric(WE) sound system. CinemaScope was installed in about 1956. By now there were said to be 950 seats; if this is accurate an additional 160 seats had somehow been added since opening.

Even the closing was not reported. It is thought The Prince of Wales Theatre closed in about 1960. It went over to bingo, and was still standing into the 1990’s. It has since been demolished, and a vacant lot sits rather forlornly on the site at the junction of Rokeby Street and Fernwood Road.