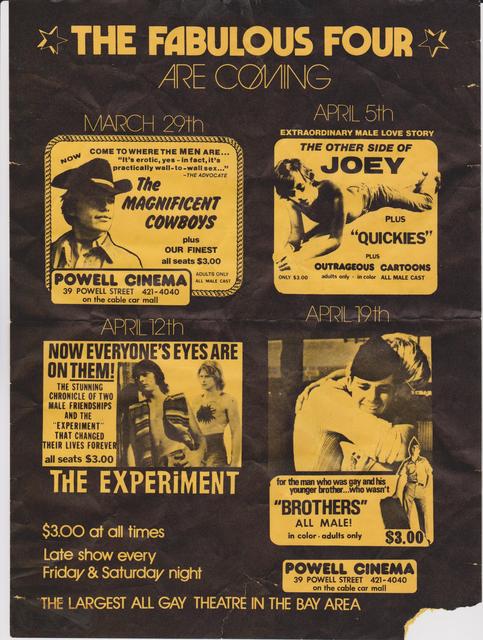 A second run, grind-run theatre on Powell Street near Market Street and the cable car turnaround.

The Powell was a wonderful theatre. i can still see the red walls. When you walked in, there were doors to your left to enter the auditorium, and to the right, a long hallway that led to the womens restroom, that had a nice little lounge inside, and the mens room at the end of the hall, that just had black walls and a wooden toilet booth. In the auditorium one aisle went down the middle and seats were on both sides. In the left rear, the area was called the “sin section because of sex that went on in there. The walls had murals of gold miners. The theatre had a interesting curtain, it went from left to right and was gold. The Powell did show main porn, then went to gay porn. The local businesses did not like that idea of tourists walking by and seeing "the magnificant cowboys” and “the experiment” on the marquee. The Powell then, managed by John Stefanelli, showed classic films, and the rocky horror picture show at midnight. “Tommy” the movie did well at midnight there. It remained classic movies until its closure. It was gutted out and a Burger King took its place. The old timers still call the rear left section the “sin section”. A very fine theatre.

But what I most remember were the old musicals and the elderly fans who used to turn out to see them, along with those of us who really appreciated seeing the old movies in the old theatre that must have played them shortly after they came out the first time.

Few movie theatres do I miss as much as the Powell.

I arrived in San Francisco in 1964, a Texas green horn desperate to get away from the constraints of the bible belt mentality that still ruled the south.

My first job in San Francisco was at Tad’s Steak house up a block from the Powell Theatre. I worked a split shift from 10am until 2pm then back again from 6pm until 10pm. A steak dinner was a dollar for a steak, baked potato, small salad and garlic bread. Coffee was a dime. A bargain even then insured a substantial clinetelle of both residents and tourists.

The Powell Theatre became my afternoon refuge. There were 15 operating movie houses in downtown San Francsico showing everything thing from first run films to 2nd run double bills. Every theatre had daily matinees. The concept of “revival houses” hadn’t started yet but the Powell had a healthy dose of films of the 40s and 50s along with more current 2nd runs. For an admission of 25 cents I was introduced to Hollywood’s “Glory years” . I saw my first Jeanette McDonald Nelson Eddy film there and The Marx brothers sublime lunacy would pop up occasionally. The films changed three times a week so there was always a steady supply of new entertainment.

The theatre box office was a stand alone booth off the street. There was a short slanted walk up into the theatre with displays on either side for a posters of current and coming films. Inside there was a small room with vending machines. No real snack bar – no usher taking your ticket. . The back left of the auditorium still had the remains of a “cry room” a sound proof room with a glass front and side door where noisy infants and their parents could be isolated from the theatre and still watch the film. The glass front and side entrance door had been removed but a portion of the side wall still remained.

I wandered into this theater back in the 70’s and without anticipating anything special, saw David Lean’s “Great Expectations”. There are few better experiences than being surprised by a great movie. I told my son about it tonight and he asked where I saw it. I said it was the Powell Theater and speculated that it was in the Burger King that we dined in a couple of years back. Sure enough.

While living in San Francisco the year of 1969, the Powell Theatre was my main movie hangout, I just loved that classic little theatre which played all of the classics rotating…‘plus new shows changing all the time.

Two of my original photos were deleted and replaced with “color corrected copies” which I do not appreciate. My comments under the photos were also removed, and credit for these photos were given to the new poster. Please correct this from happening again.