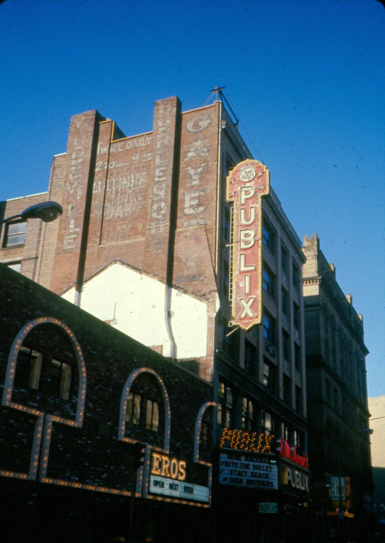 Built on the site of the World Museum, later Layceum Theatre at the lower end of Washington Street near Boylston Street. The Gaiety Theatre was opened on November 23, 1908 with burlesque musicals. Seating was provided in orchestra, a curved first balcony and a straight-front steep gallery. By 1931 it had been taken over by E.M. Loews and had been renamed Gayety Theatre, presenting two movies plus 5 acts of vaudeville on stage. On January 1, 1944 the gallery seating area was closed following the introduction of a new safety code. In September 1946 it was renamed Victory Theatre following a refurbishment by E.M. Loews and played two feature films, but vaudeville had been dropped from the programing. In 1949 it was renamed Publix Theatre. Operating as a grind-run theatre. This one seemed to specialize to a great degree in programs of westerns. It was closed in the 1980’s and became a warehouse. It was slated for demolition in late-2004.

The map and street view do not currently show the correct location for this theatre. It should be about ¾ miles south of what the map shows, at the corner of Washington and Lagrange streets.

I haven’t visited Cinema Treasures in quite some time. I’m shocked to see the extensive posts that documented the attempts to save this theater are, like the venue itself, gone. Anyway, the Publix Gaiety, had superb acoustics, was located in the Theater District, an area which had at one time had special zoning considerations. Whether or not it could have survived economically as a theater, I don’t know. Its demolition was an architectural loss.

The posts are not gone. There are 198 comments on this theatre going back to 2004.

hey Dick I remember the stuart theater very well!! cheap dbl features (50 cents!) and all the sex ya wanted if sat on the left hand side lol but yes the projection was terrible and anytime new people walked in you had a bright spot on the screen! Still would not have traded that time for anything!!

I walked by the site of the Publix yesterday and there finally is some activity there. Looks like site prep for a foundation. They have fenced off the alley which ran along the theater’s right (north) side so that it’s not part of the construction activity.

Woops….sorry Ron. I hadn’t fully figured out how the new format worked and failed to see the button that accesses the earlier comments.

Kind thanks to nvargelis for the link to the images.

Maybe that’s when it changed its name to ‘Publix’, but it had already been around for decades before 1949.