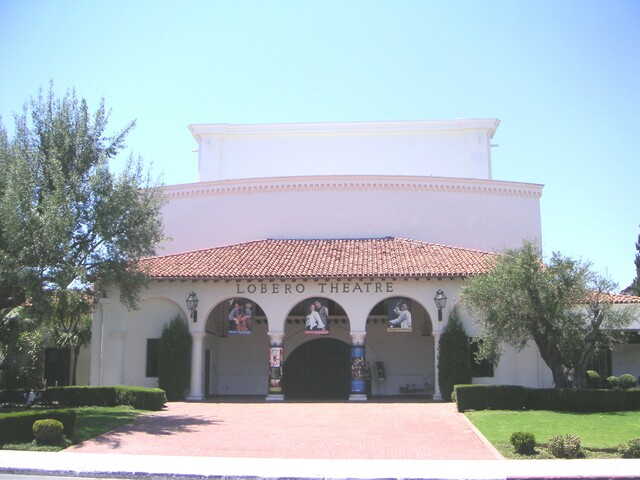 The Lobero Theatre joins, with the Arlington, Fiesta, and Riviera theaters as one of the venues for the Santa Barbara International Film Festival (SBIFF), which screens about 200 films a year. The 11-day SBIFF kicks off its 36th year March 31, 2021.

The city of Santa Barbara notes the Lobero Theatre was originally built in 1873 as an opera house by Italian Immigrant Jose Lobero. It was razed in the early-1920’s and the new Lobero Theatre, designed by Lutah Maria Riggs (1896-1984), opened August 16, 1924. In 2013 the Lobero Theatre received a $7 million renovation, which added 627 wider seats, larger restrooms and a new ventilating system.

As for movies, there were the colorful Travelogue series and those by independent directors but none to compete with the local first-run theatres. On January 12, 1996, Kathy Bates and Taylor Hackford appeared for a screening of “Dolores Claiborne” to benefit the Lobero Theatre. In October 1998 the Lobero Theatre held their second annual Kid’s Film Festival, billed as ‘films and videos made by children as well as films by adults who think like kids’. One popular showing was Monty Python’s “The Wind in the Willows”, released in the US as “Mr. Toad’s Wild Ride”.

Looking back in the Los Angeles Times, there was one play in its entire history that was banned. In February 1949 the Lobero Theatre board cancelled the world premiere of the “Mr. Adam” ‘on grounds of taste’. It was felt that since the Lobero was supported by public subscription, it must be responsive to the standards of the community. The book was banned in Russia and Spain and In May 1949 the New York production of “Mr. Adam” closed after five performances.