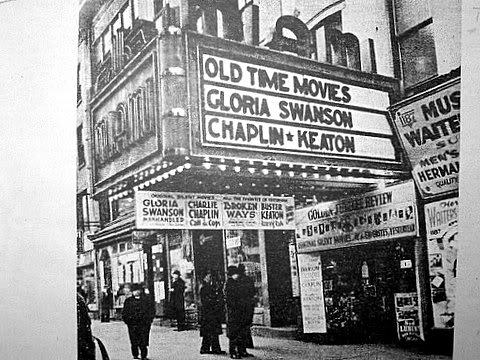 Located on 6th Avenue (today Avenue of the Americas) at W. 47th Street. Built and opened in 1914. By 1940 it was operating as the 47th Street Cinema, screening classic movies and Irish movies. Vittorio De Sica’s neo-realist masterpiece “Shoe Shine” began a long run in August, 1947.

The status of this theatre should be changed to “Demolished” as the entire odd-numbered block front of Sixth Avenue between 46th and 47th Streets is now occupied by the monolithic 1185 Avenue of the Americas.

As the Avon it functioned as a TV preview theatre. When I was a teen in the early 1950’s I attended one of these sessions with my parents. Most of the pilot’s we previewed never made to it the airwaves.

A permit for construction costing $300,000 was issued for the theater at 1187-1197 Sixth Avenue in 1944, according to an entry in the Office for Metropolitan History’s Manhattan New Building Database. As new construction had to be approved by the War Production Board at that time, I don’t know if this project was carried out or not. If it was, the architects were Schlanger & Sornik.

The Avon Theatre at 6th Avenue and 47th Street also is mentioned in the John and Drew Eberson archives as a 1952 project (#1624), though the nature and extent of the project is not stated.

“NYC issued a c/o to a 498 seat motion picture theater at this address in March of 1936. It was an existing building so this theater was most likely operating prior to that date. The owner at that time was Ben-Jim Amusement Corp.”

“In early 1937 there was a 47th Street Cinema operating at 104 West 47th Street and showing Irish films. Could this have been the Miami?”

“Walter J. Salamon, as president of Manhattan Fee Co., will build a one-story moving picture theatre at No. 821 Sixth Avenue, L shaped to Nos. 102-104 West Forty- seventh Street, New York, to seat five hundred and seventy-two. Thos. W. Lamb, as architect, filed plans for an outlay of $125,000.”I don’t know if the address 821 Sixth Avenue was a typo or part of some earlier numbering system, but the place did apparently sit at least partly on the site of the 47th Street Cinema AlAlvarez mentioned. I wonder if these could all have been the same theater? As the 1913 building was L-shaped, the entrance might have been moved from one street to the other for a while.

Steven, why don’t you post them here? I don’t see an entry for that cinema yet and it may have been this location.

Hi Al , I’ve posted them over at the Cinema Treasures Facebook page.I’ll post them here too if it’s not a problem.

Steven, the windows above the 47th Street Cinema marquee you posted and the one over the Miami marquee sure do look similar.

Nice find! They sure look like the same building.