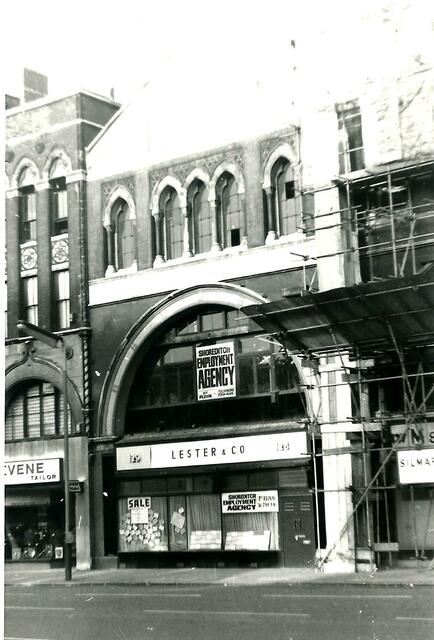 In the Shoreditch district of east London, one of the most distinctive buildings on the High Street, opposite St. Leonard’s church, is an ornate block of shops, offices and apartments.

The building’s original purpose is still spelled out across its frontage in a mosaic that reads “Wells & Company Commercial Iron Works”, but it has seen many different occupants since it was first built in 1877.

Edward Wells & Co was a wholesale ironmonger. Designed by architects Fowler & Hill, and built by W. Crockett of St. Pancras, the building cost £8,651 and was intended to be a showroom and shop in addition to a factory.

It is a grand building, with Moorish and Gothic influences in the decoration, but the company was not to enjoy it for long, as it moved out in 1895.

The building was divided up between smaller businesses. These have included a bank, a boot and shoe maker, a furniture and gas mantle manufacturer and a refreshment contractor who shared his premises with the splendidly named Tee-To-Tum Tea Club.

Most interesting to cinema buffs, however, is Philip Michael Beck, a glass merchant who took over number 126 in 1909. With an eye on diversification, and the new ‘moving pictures’, in January 1910 he opened the Palais Eden Theatre (cinema) in his premises.

This must have been successful, as, soon afterwards, he transformed another part of the building into the Alcazar Picture Palace (which has its own page on Cinema Treasures).

However, Mr Beck’s optimism about this new entertainment appears to have waned fairly quickly, as neither cinema lasted very long.

The Palais Eden Theatre appears in the 1914 Kinematograph Year Book, with Mr Beck as the proprietor.