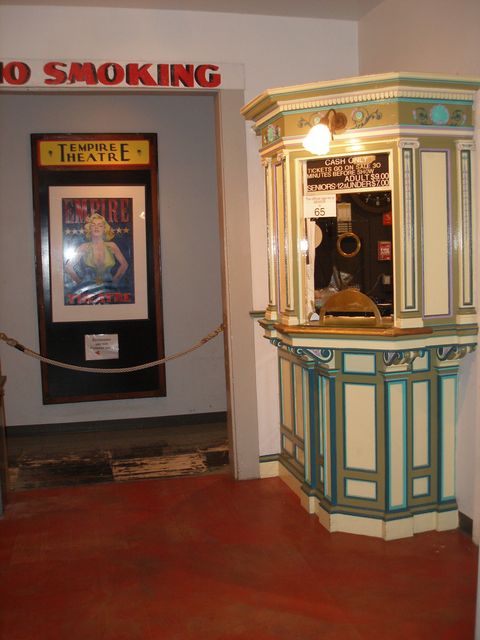 This old wood-frame theatre is one of the oldest existing theatres in the State of Rhode Island and exudes a certain kind of summer-camp charm. It is on Block Island in the town of New Shoreham. It was built in 1882 as a roller skating rink. By 1897 it was in use as a church, ballroom and for storage. It soon converted into a playhouse theatre named Empire Theatre and in the early-1900’s it began screening movies. It was closed in the mid-1980’s and in 1986 new owners took over and began a restoration project.

The Empire Theatre reopened in 1993 with the movie “Alive”. It operates in summer months as Block Island’s only movie theatre.

“He would have been in his seventies when Gerald was working there.”

If you are referring to me, I never said I worked there. That 1970 image was scanned from a book. I am simply interested in the topic of old R.I. theatres and have posted my own photos of the Empire as well as historic ones I’ve found, many of them on vintage postcards.

Sorry for my confusion. Thanks for the great old photos though. I am particularly interested in this one, due to my Great Uncle and the idea of a theater as a centerpiece of someplace isolated like an island would be off season.
Thanks,

I got a “Notification” of your query this AM and contacted King “Doc” Odell for a comment. King is currently living a very active retirement, and out of respect for his privacy (which I promised to protect) I am giving you his written response sans any electronic identification:

“I did know Gerry DeLuca from the Italian teaching days, and I did at times see movies at the Cable Car Cinema when he showed some Italian movie that struck my fancy.

I bought the Empire from Margie and Larry O'Keefe at a date too vague to recall. I have kept all the little programs of all the movies I did show at the Empire.

I sold it to Bob Huggins who made some improvements. He got caught up in the Credit Union fiasco in Rhode Island and had to sell it to the present owner who has made many changes (food, bar, etc.). I have never met him. His name is Gary Pollard and he comes from New York. From what I gather, he has a full-fledged apartment on the upper floor. He is frequently in the BI Times, fighting the zoning and Historial Boards over what he wants to do. He has made a considerable financial commitment to the building.

He keeps it open far longer than I did for a season. I had to get back to school (Moses Brown School, Providence, RI (SEH)).

DeLuca has always been a theatre buff, and is quite a pleasant guy."

I will be in Block Island next Wed on a bike vacation. I plan to stop by at both places and take pictures and perhaps take in a movie.

This theater, like so many others, is threatened by the the impending move by the studios to only supply theaters with digital prints of films: View article

The Theatre Historical Society archive has the MGM Theatre Report for the Empire Th.It’s Card # 522. There is a photo of the facade taken in May 1941. The Report says that the house is in “Fair” condition, and that it has “summer patronage”, and no competition. Built over 15 years ago (in 1941), and showing MGM films for over 5 years. Says it’s on “Fountain Square”, and has 500 seats. The 1940 population of Block Island is given as 1,000.