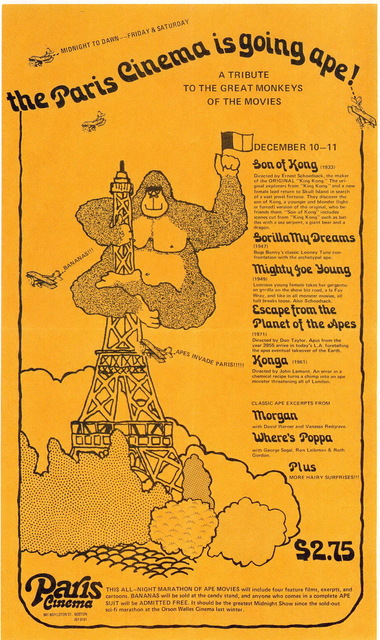 A popular first run art house across from Prudential Center from its opening on February 6, 1964 and up to the 1990’s. At a certain point as a single screen theatre it could not effectively compete with the Boston area multiplexes and was closed in 1993, and gutted.

I saw one of Woody Allen’s mid-1990s movies there. I think it was Manhattan Murder Mystery.

The Charles, The 57 and The Cheri were the auditoriums that I remember having 70 mm capacity. Charles was The Deer Hunter & The Rose. 57 was The Doors and The Exorcist. Cheri was Edward Scissorhands. Paris I remember for being the cinema for Woody Allen movies and the Last Temtation of Christ. The latter film had protesters that were saying the our father and hail mary prayers in a protest circle. One person told me I was going to the place below because I was vewing the film

I also viewed “The Graduate” in 67' it was a Sack theatre with large picture windows showing the lobby to those on the street, very nice blue carpeting and of course the ‘new age’ formica candy counter, I’m partial to glass block, all in all I liked the theatre as with any single screen house!

According to a Globe article discussing its imminent closing, this theatre had 600 seats

Member the “star trek” wall at the Paris? It was a thick, enlarged mesh of bony ovals. Not jagged but molded and smooth. I don’t what art movement to align it with (suburban wet bar rococo?) but it definitely came from the late 60’s/early 70’s. It was behind the snack counter. I’d love a photo!!!

The Paris was not a Sack theatre when it enjoyed its heyday in the late 60s and early 70s. It was four-walled by Joseph E. Levine of Embassy Pictures, which became Avco-Embassy during the lease, to show “The Graduate,” “The Producers” and “The Lion in Winter” because Levine was still having a blood feud with Ben Sack over Sack’s 1965 exhibition of Levine’s release, “Darling,” and no way was Joe gonna let Ben make any money off him. The feud was finally settled when Sack booked “The Night Porter” from Joe in 1974. I know this because I handled the PR for them, God forgive me.

“The Graduate” opened here fifty years ago today. The film went on to play (a venue record?) 30 weeks. And here’s a new retrospective article which includes some exhibition history (and other) details to commemorate the classic film’s golden anniversary.

I remember the Paris being where all Woody Allen’s films premiered/played.