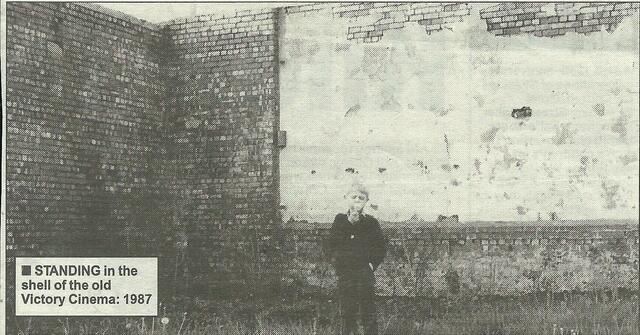 In the Miles Platting district of Manchester, there is a listing for a Picture Theatre, at 63 Varley Street, in the 1914 edition of the Kinematograph Year Book (KYB). There were 400 seats, and the cinema was operated by J. A. Holding.

Unfortunately, the next KYB I have access to is that for 1923. By then, the Picture Theatre was not listed, but the Victory Picture House, Varley Street, was. No further information was provided, but it seems safe to assume that these were the same building (especially as Varley Street is a relatively short road, and certainly not a main thoroughfare). (The cinema was at the corner of Varley Street and James Street: at that junction, nowadays, one side of Varley Street is commercial premises; the nearest house number on the other side is number 46. However, the housing is relatively new, so re-numbering is highly likely as the modern houses presumably replaced terraced houses.)

By the 1928 KYB, the next I have access to, the proprietor and manager was John Baum. Shows were twice nightly, with two changes of programme each week.

Press cuttings dated 20th February 1929 reported that architects E. Ogden & Co, of Manchester, had been engaged to prepare plans for “the conversion of the temporary building into a permanent hall”. Contracts had not been placed, but it is assumed the work went ahead, as the 1932 KYB lists this as the Victory Cinema; perhaps the conversion merited an upgrade to the name!

The 1935 KYB provides a seating capacity of 450. Shows were twice nightly, with matinees on Monday, Thursday and Saturday.

In 1939 the proprietor is shown as A. E. W. Pentelow, of Grindleford, Sheffield. The Monday and Thursday matinees had been dropped, and the seating was given as 400.

By 1944 Mrs A. Heathcote, of Pendlebury, had become the operator. Seating had reduced further, to 370.

The final KYB entry is in 1953. It is assumed the Victory Cinema closed around this time.

In a reminiscence in the ‘Evening News’, in June 2004, a local resident remembered this as a “completely plain building [which] had its name in a set of glazed tiles over the entrance”.

The building initially went into light industrial use. It was only partially demolished in the 1960’s; astonishingly, as late as 1987, the silent screen, painted on the rear wall, could still be seen (see photograph).

Those remains appear to have been cleared by the early-2000’s.