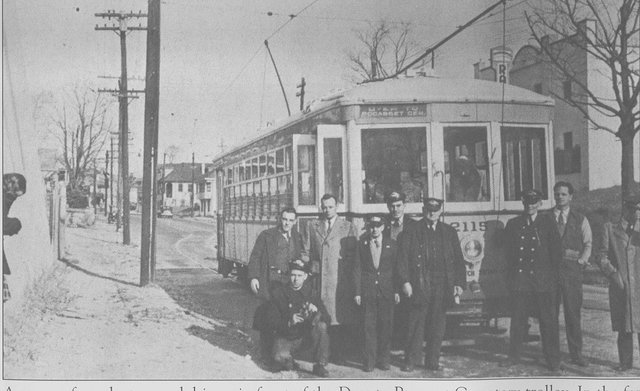 A long-gone neighborhood theatre in the Silver Lake neighborhood that includes part of Providence and part of Cranston. It was first called the V.C. Theatre and then became the Rainbo (no “w”). It lasted until the early 1950s.

It was located at the end of the trolley line that ran up Pocasset Avenue and a brief stretch of Dyer Avenue.

In its heyday the Rainbo ran four nights a week, and continuously on Sunday from 2 to 11 P.M. The top admission was 25 cents for adults and 11 cents for kids at Sunday matinees.

In this photo we can see, behind the trolley, a bit of the Rainbo Theatre. After the theatre was demolished, the vacant lot became used for decades as a turn-around for the Dyer-Pocasset bus line. An uneven short fragment of the theatre building remained like some kind of Roman ruin.

In a March 27, 1986 piece in the R.I. Italo-American weekly The Echo, writer Joe Fuoco reports a conversation with Elmo Vendettuoli.

EV: “My parents, Carmen and Laura Vendettuoli built a theatre called the V.C. Theatre. My father took his initials and reversed them. It later became known as the Rainbo, spelled without the ‘W.’ It seated 350 people and we played every serial there was. The serials ran about 18 to 20 minutes. All action! Now the Rainbo is gone. Demolished! Nothing there.”

EV: “Sure there were. We had a couple of fires. You have to understand that old films were [nitrate] 35-millimeter. Combustible. And we used those big carbon arc lights. Well, a film would break and suddenly catch fire. A lot of films were lost that way.”

My note: the Vendettuolis had previously run the Star, just up the street. This neighborhood of Cranston and nearby Providence is called Silver Lake.

The 1949 Film Daily Yearbook gives the seating capacity as 280.

Flash Fire Empties Theatre
CRANSTON, R.I. – A flash fire emptied the Rainbo Theatre of 250 patrons, mostly children, during a recent afternoon performance. The fire broke out as Elmo Vendettuoli, the operator, was reloading the projection machine. The projector was damaged considerably. The theatre was emptied in an orderly manner when Joseph Santagata, the manager, gave the warning and assistants opened all exits. The show was resumed within an hour.