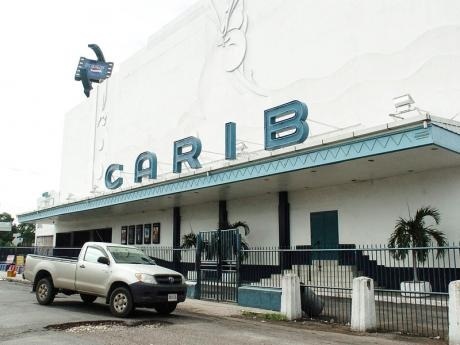 With John Pike as architect, the Carib Theatre was one of the most unusual Atmospheric style theatres ever built. The walls and ceiling of the auditorium were designed to create the illusion of being under the Caribbean sea, looking up at the surface. The auditorium was also egg-shaped, with the front end shirred off to create a circular stage area, which was fully equipped for live performances in support of the movies.

When the Carib Theatre first opened in April, 1938, it was the largest building of any kind on the island of Jamaica. Its huge interior measured 1 million cubic feet! The 1,750 seats were divided among the orchestra, balcony, and a small mezzanine that was situated along the right wall. In 1947 it was taken over by the British owned Rank Organisation. The Carib Theatre was reported to be the highest-grossing movie theatre in the entire Caribbean. In 1954, its round proscenium had to be demolished to permit installation of a 54 feet wide CinemaScope screen. In 1982, a new sound system was installed that experts claimed was one of the best in the world due to the acoustics of the egg-shaped auditorium.

Sadly, in 1997, the interior of the Carib Theatre was totally destroyed in a fire that started in the ceiling. The exterior walls were saved, and now contain five cinemas operated by the Palace Amusement Company, Ltd.

I was trying to find out if one of the architects that design the Carib theatre was Kenneth Simmons. You can contact me at

Caribe Theare can be seen directly in the backround towards the end of the 1976 film “Rockers”. This was a modern-day Robin Hood story with a happy reggae soundtrack and alot of Rastafarians smoking massive ammounts of marijuana. It also featured an all-star cast of reggae legends including Leroy “Horsemouth” Wallace, Richard “Dirty Harry” Hall,Jacob Miller,Gregory Issacs,Burning Spear,Kiddus I, Robbie Shakespeare.

This appears to be a new theater near Kingston:
http://www.islandvillageja.com/villagetheatre.htm

Here is a March 1980 ad from the Kingston Daily Gleaner:
http://tinyurl.com/2mvl8d

There are photos of the Carib on the Palace website:
http://tinyurl.com/2fcdl4

Hi, I really need help finding a movie my mom and dad watched at the Carib theatre in the 1960s. It was a love movie and the leading star name was Michelle Brenade, at that time my dad told my mom if I ever have a girl/daughter I would give her that name “ Michelle Brenade”. I was then born years later in the early 1970s and my name is Michelle Brenade. I would like to find this movie can someone help me? I live in the States now and would appreciate any help. Thanks in advance. Please contact me at