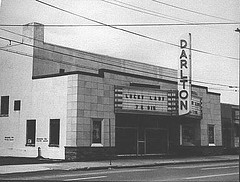 This theatre in the Darlington section of Pawtucket had a stucco and creamy tile exterior that was described as being southern Californian. It opened in October 1940 with a seating capacity of 913. It ran primarily second run movies. One of the unusual features of the Darlton Theatre was a windowed-off soundproof crying room with 12 rocking chairs, where moms could tend infants while watching the movie. Financial difficulties forced the theatre to shut in October, 1977. It was later razed, and a bank now occupies the site.

RonnieD,
That’s the only currently known picture of the Darlton, and it was published in the Providence Journal at the time of the theatre’s closing. There must be more photos out there.

Gerald,
I would think there would be other pictures of the Darlton around perhaps taken by people in the neighborhood, but unitl they surface, if ever, thanks for sharing the Journal one. It’s a treasure.
I never knew before hand that the Darlton was closing. I live in southeastern Mass. but use to venture across the state line for movies. I often didnâ€™t have access to a R.I. paper (there were no computers) to see film listings so Iâ€™d drive down Newport Ave, check out what was playing on the beautiful Darlton marquee, drive another mile down the road to the 4 Seasons to see what they were offering and then decide what I wanted to see.
The night I drove up to a vacant dirt lot where that beautiful theater use to be, I was devastated. It was like a bomb had fallen and obliterated it. There was a sign on the property announcing that the next attraction on the site would be a new bank â€œcoming soonâ€. I was heartbroken and still miss the Darlton.

I was just a little snot-nosed kid in 1977 but I remember the line around the block for Star Wars. I think that’s what it was.

Thanks for the picture. It gave me goosebumps. for real!

The Dalton…my first offical job as a union projectionist. It was summer daily matinees with all Disney films. Joe Jarvis had the lease and his son helped him run it. It was a very attractive building. Had a cryroom next to the projection room. The projection room was quite large with a window overlooking Pawtucket Ave.

Here are a few photos from about 1941:
View link

Operators of various theatres in the Pawtucket-Lincoln-Valley Falls area in 1951, gave their opinions on ways to combat the effects of TV on their theatres. Written as a report for the Pawtucket Times, the results were also reported in Boxoffice magazine in the issue of January 27, 1951:
View link

I worked at this theater as a candygirl and in the box office as a cashier during high school and college.It was not owned by Joe Jarvis,but by the Pinault family,They also owned the drugstore on the corner across from Kip’s and the Beef Hearth. In the 60’s they showed many first run movies.

The Theatre Historical Society arvhive in Illinois has the MGM Theatre Report for the Darlton. But no one filled it out, so there is no info. There is an undated photo, very similar to the one above, and on it is written “Darlton Theatre in Darlington, Massachusetts, 3 miles east of Pawtucket”. So they got the location wrong. However, the MGM Report for the Bates Theatre in Attleboro lists the Darlton as a competing theater and correctly states that it is in Pawtucket.

There are TWO reports for the Darlton Theatre in the MGM Theatre Report project. Each report has a slightly different photo of the facade. Both reports are in the Theatre Historical Society archive. Card # 90 has almost no info and has the incorrect city, stating that the Darlton is in the town of"Darlington, Mass.“ which does not exist. Card # 533 is correct. It lists the address as 807 Newport Avenue in Pawtucket. The photo of the exterior was taken in April 1941. The Report says that it has 901 seats, apparently all on one floor, and that it was built in 1940 and is in excellent condition. It exhibits MGM product. The photo has Frederick March in "Victory” posted on the marquee.