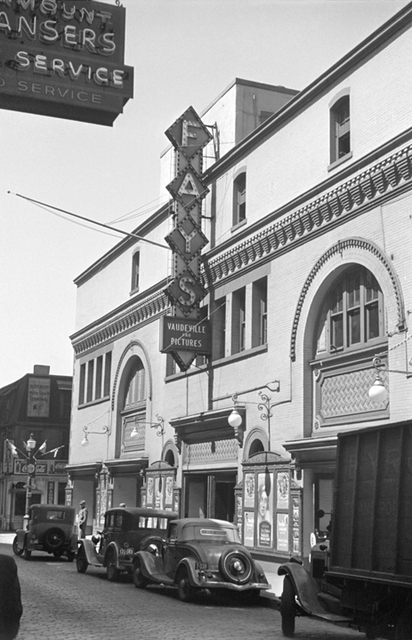 The Union Theatre was opened in 1912. It was revamped and reopened as Fays Theatre on November 18, 1916. It was a very popular vaudeville house with screen attractions for the decades between the two World Wars, and up to the very early-1950’s, when it was closed and razed. It was formerly known as the Union Theatre.

Rhode Island author H. P. Lovecraft (1890-1937) won a $25 prize from Fay’s Theater in January 1917 for his review of “Image-Maker of Thebes.” He was a patron of downtown Providence theaters from his adolescence onward. Brown University Prof. Robert Kenny recalled that Lovecraft worked as a ticket-seller at a downtown Providence theater in the late 1920s (when he was living at 10 Barnes St. on the East Side) in order to make ends meet. I wonder if anyone has any idea which theater Lovecraft worked at? The RIHS Fay Theater collection has personnel records for the Capitol Theater (owned by Edward M. Fay) from 1929-30 and I wonder if Lovecraft might have worked there.

Click here for a photograph of Fays Theatre taken c. 1937.

From Boxoffice Magazine, December 2, 1950:
“Fay’s Theatre recently inaugurated a new policy of presenting vaudeville and motion pictures twice a week. In the past Fay’s has run the same bill for a full week. The new setup calls for a completely new show every Sunday and thursday.”

[Note: the following year, 1951, Fays would close for good and subsequently be demolished.]

GENE AUTRY
Item in Boxoffice magazine, November 22, 1941:
“Gene Autry was guest of Edward M. Fay at a luncheon at the Shriners Club. Later he dropped in at Fay’s to say hello to manager Sam Kaufman, publicist Jack Carroll and others of the theatre’s staff.”

In an unusual bit of programming in February 1921, Charlie Chaplin’s The Kid was booked simultaneously in five downtown Providence theatres: the Strand, the Emery, the Modern, Fays, and the Rialto. Occasionally some highly anticipated movies might play in two downtown theatres, but never five! It seems to have run only one week, in an era when that was pretty much the norm, with films running a single week downtown, then moving to second run theatres and outlying houses. Each of these theatres accompanied this feature with short subjects or live Vaudeville acts.

The Union Theatre first opened on Saturday, March 9, 1912 with a program of vaudeville and motion pictures. This newspaper ad from the Evening Tribune the following day detailed that first week’s program.
NEWSPAPER AD
Four years later the theatre would be renamed Fays Theatre and pretty much continue a policy of vaudeville and movies until it closed in 1951 and was razed.

Showman Edward M. Fay leased the Union Theatre in 1916 and in November of that year it was being readied to be reopened under his name as Fay’s or Fays Theatre (apostrophe usually omitted in his publicity.) A piece in the Evening Tribune on November 12, 1916 read:

“Edward M. Fay, the popular manager of Fay’s Band and Orchestra, and prominently identified with the popular Hunt’s Mills amusement resort, has embarked on a new enterprise that promises to surpass his former achievements, both in uniqueness and popularity.
"Associated with a newly formed company, Mr. Fay has leased the Union Theatre on Union Street, near Washington.
"A visit to that house at present will disclose a large and busy corps of artisans redecorating both the interior and the outside of the building. New draperies and carpets and an attractive stage setting are being prepared. Unique uniforms are being made for the ushers and attandants.
"When the house is ready for its formal opening next week, it will be known as Fay’s Theatre – the home of Fay’s Feature Films. Only the very best films possible to obtain will be presented on the program, and a large concert orchestra will play descriptive music in conjunction with the entertainment. The services of several well-known operatic singers have been secured to fill engagements during the coming season.
"The house in its spick and span cleanliness, and its attractive decorations is sure to become one of the most popular photoplay theatres in the city.”

In a newspaper ad, Mr. Fay explained his plans:
MESSAGE FROM MR. FAY

The Theatre Historical Society archive has the MGM Theatre Report for Fay’s Theatre. There is an exterior photo dated April 1941. The address is 60 Union, and the theater is in Fair condition. It was over 15 years old, and was not showing MGM films. It had 1,938 seats. The 1940 population of Providence was 253,500. Card # 544.

Before this Fays Theatre in Providence was opened after the Union changed its name around 1912, there was a Fay’s (not Fays) Theatre in Pawtucket in 1909 at least, as an alternate name for the Pastime Theatre there.