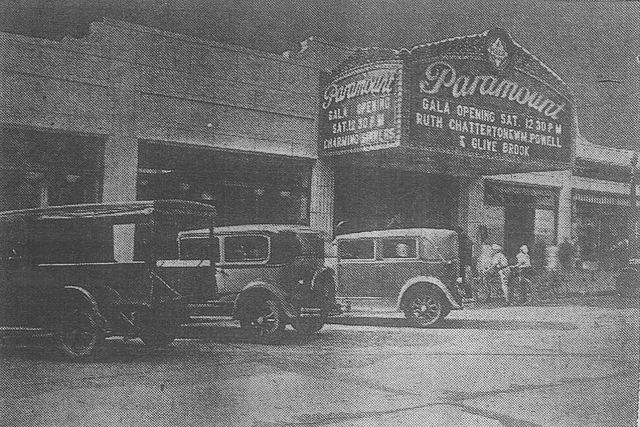 The Paramount Theatre was opened on August 10, 1929 with Ruth Chatterton in “Charming Sinners” (aka The Constant Wife). This first-run movie theatre in the heart of Newport closed in 1961 with Fred MacMurray in “The Absent Minded Professor”. It is survived by the nearby Jane Pickens (Strand) and Opera House.

The building has been gutted and has been converted into apartments. The façade and outer lobby have been removed.

NativeForestHiller,
A good deal is being done. I cannot provide you with much in the way of figures or statistics, though it is clearly my observation in walking around the city a lot. I don’t live in Newport. I come from another part of RI and like to go there often, especially by ferry from Providence during the warm months. A good deal of the area called The Point, with its historic little houses, owes its survival to the efforts of the late Doris Duke (whose mansion Roughpoint is now open to the public). The Preservation Society of Newport might be of some assistance in learning about these issues if you were to connect with them.

Thank you, Gerald! My family & I joined the Preservation Society of Newport, and visited several prestigious mansions. We also toured the quaint Colonial streets, and the wharves. We were astonished! It’s a great obstacle to preserve sites in NYC lately. I will further explore Newport’s preservation strategies.

Hello Gerald….I just wanted to thank you for the walk down memory lane. I grew up in Newport in the 50’s and remember going to the Paramount Theatre when I was little. And later as a teenager having a job at Cote’s Pharmacy right next door But it had closed by then and was vacant. Even then I was impressed with it’s beauty.It will always hold great memories for me. I do still visit it often as my mother has lived in the Paramount Building since it opened. She and my Dad were two of it’s first residents. Thanks again for the journey. N Brothers

“Manager Jerry Wagner of the Paramount, Newport, took Lester the Great’s magic show to the naval training base for a special show armistice eve. The mysteryman did big business with his 11 p.m. performance at the Paramount the following night, a blindfold drive through Newport streets at noon that day proving an effective publicity stunt.”

“The Paramount Theatre building in Newport went on the auction block July 8, when the movie house, described as fully equipped and ready to operate, was offered for sale. It has a seating capacity of 1,200. The 22,987 square-foot property also includes five income-producing stores in the building, located at 70-80 Broadway.”

Increased Staff Reopens Paramount in Newport
NEWPORT, R.I. – After being closed for renovation and redecorating, the Paramount has reopened under its new lessee, the Zeitz Theatres of Rhode Island. It has a continuous run from 1 to 11 p.m. withh three changes of program a week. The other two theatres [Strand and Opera House] of the city run continuously only on weekends with two changes a week.

The Paramount lobby and marquee have been painted. The latter is now lighted with 2,000 lamps. The foyer has been recarpeted. New projecting machines have been installed and the booth has been refitted. The lobby and foyer have new display boards with mirror frames.

Joseph Viera of Fall River, Mass., has been appointed manager and is being assisted at present by Carl Zeitz from the home office of the new operating company in New Bedford, Mass. Richard Stevenson is doorman. Fred Lewis, operator ever since the theatre was built, still is there with three assistants, two more than previously; Barbara Harel (?) and Geraldine Carrigan (?) are the new cashiers, June Flohr (?), Dolores Johnson, Dorothy Oakham and Catherine Smith are usherettes.

The Paramount Theatre reopened with the moved-over staff and management of the Colonial Theatre in 1940, with the Colonial closing for good and becoming a Newberry store. This was reported by Boxoffice magazine in its issue of April 27, 1940.

“E. M. Loew circuit took over operation of the Paramount, Newport, with manager Gerald G. Wagner and his entire staff at the Colonial moving to the Paramount. Colonial, occupied by Loew for the past two years has been sold to Miss Ruth L. Weiss of Boston and is scheduled to be torn down and replaced with a new $45,000 store for J. J. Newberry Co. According to Wagner, the same policy maintained at the Colonial will be continued at the Paramount; dual subsequent run features with added vaudeville on Sundays.”

The Theatre Historical Society archive has the M-G-M Theatre Report for the Paramount, it’s Card # 529. The address is “Broadway”. There is an exterior photo dated May 1941. The condition is Good. It says it was built in 1933, and is showing MGM product. There were 705 orchestra seats, and 507 balcony seats, total 1,212.

This theatre appears to be almost identical to Woonsocket’s Stadium Theatre, which fortunately has been preserved and is in current use.

The actual opening date according to the Newport Mercury is August 10, 1929.