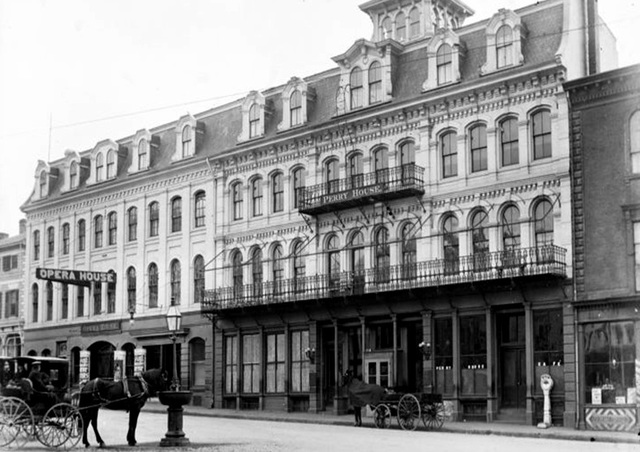 Located on Washington Square, the 1,217-seat Opera House opened on December 28, 1867 with “Lucretia Borg1a” and presented touring theatrical productions. It became a movie theatre in the early part of the 20th Century.

In recent years, before and after being triplexed, it provided much of the major Hollywood film fare shown in the city and is also one of the venues used by the Newport Film Festival.

The theatre has undergone a major restoration to return it to its original opulence. It was closed in August 2010, to be renovated and converted into a performing arts center.

A Mary Pickford wannabee standing in front of the Opera House entrance in Newport in 1919. The movie being shown is the 1919 western Sally Burke of the U-Bar-U, with Louis Bennison.

When is the restored Opera House planning to open? Does it have a web site?

I began working at the Opera House Cinema when I was 18 years old. I worked there from 1987-1991 as an Usher, as well as concession booth and box office. My boss was Dave Silva. I have so many fond memories of the times and people in that place. Back in 1988 when Dave and I explored the unused and hidden rooms upstairs I had found an old newspaper that contained an ‘I Love Lucy’ comic strip. I also met Andy Summers of ‘The Police’ as I was working the upstairs concession booth by myself. He carried his daughter in his arms, she looked like a little doll. He bought a Toblerone. His daughter watched and finally said, ‘Oh Daddy, you know you ought not to be eating a Toblerone!“ It was the cutest thing ever. I’d like to say hi to my friends, and thank you for the memories. Jeff Grant

The Opera House has just closed for transformation to an arts center. A short piece in the September 1st issue of “Newport This Week” stated:

“The marquee above the historic Opera House Theatre is blank this week, after the movie house closed its doors while a volunteer committee works to raise money to transform the building into a 650-seat performing arts center.

“The project to build the Newport Performing Arts Center is expected to take some $20 million to complete, and is one of the more ambitious plans to date aimed at breathing new life into the city’s Washington Square neighborhood.”

I think the page should be updated. It is no longer controlled by the Boston Culinary Group. The house is now owned by the Newport Performing Arts Center LLC. The phone is listed as 401-619-4575. The email is operahousetheater.org And closed should be changed from closed to renovating.

Their new webpage is: http://operahousetheaternewportri.org/

They have a gallery with a lot of interior photos – the place will be wonderful when restored!

A friend and I have disassembled what is left of the Wurlitzer Theatre Pipe Organ that was installed there. We are going to recycle the parts and save other working Wurlitzers. I chased this instrument for over forty-five years and was appalled at the damage that had been done to it since I first inspected. Liz Drayton of the Opera House Board was most cooperative. We call this the organ donation to save organs.

The Theatre Historical Society archive has the MGM Theatre Report for the Opera House; it’s Card # 528. There is an exterior photo dated May 1941. The address is “Washington Square”. The condition is Fair. It was over 15 years old and was not showing M-G-M product. It had 975 seats. The 1940 population of Newport was 30,500.

Newport’s Opera House opened on December 28, 1867, with a performance of the drama “Lucretia Borgia.” Newspaper reports of the time indicate that the theater was designed by architect-builder James Rudolph, with the assistance of architect-engineer Benjamin Coit.