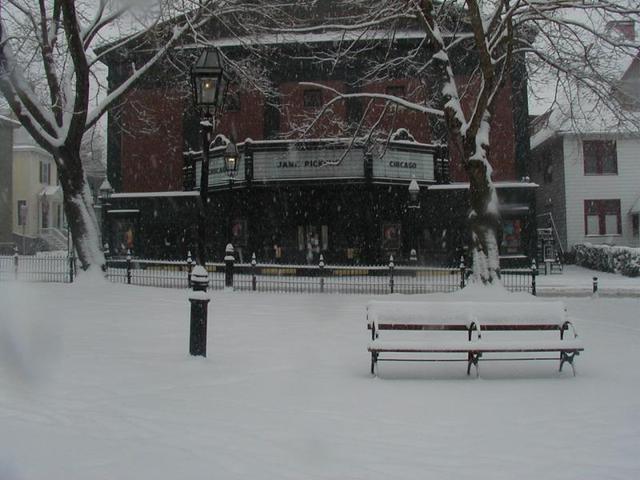 The Jane Pickens Theatre is a historic single-screen theatre that is beloved by Newport residents. It was originally built as a church in 1846. As a theatre it has been showing movies since 1923. Formerly known as the Strand Theatre, it is where many independent and foreign films have played in recent years, as well as selected popular movies. The theatre has a balcony and a pipe organ that has been used for theatre organ recitals. The interior had a kind of classic simplicity while being at the same time a very pleasant and placid environment to be entertained in.

Like its neighboring theatre, the Opera House Cinemas, it too has been used for screenings in the annual Newport Film Festival. Washington Square, where the Jane Pickens and Opera House are, was turned into a 19th Century port town for the filming of Spielberg’s “Amistad”.

This theatre was part of the September 1923 6th Paramount Week. In this advertisement from the (Providence) Evening Tribune, September 1, 1923, we see a fascinating list of Rhode Island area theatres, many long-gone and long-forgoten, or even unheard of, as well as what they were showing during that week. The Strand (as it was then called) was showing Pola Negri in The Cheat as one of its features. CLICK HERE and move image to see all theatres.

This Providence News piece from January 11, 1919 reports on plans to use the Lafayette Theatre (earlier name for the Strand & Jane Pickens) as a “community theatre.”
CLICK HERE

My father, Gilbert Hemenway, was a projectionist from 1936-1956, mostly in New Bedford but also Fall River, Dartmouth Drive-In and Fairhaven Drive-Ins, and briefly in Newport. I believe he was here at what used to be the Strand. I went with him once in about 1955. From the descriptions, I don’t think it was the Paramount, even though my father worked for at least 3 of the 4 Zeits theaters in New Bedford. It certainly wasn’t the Opera House. I don’t remember the park across the street. Perhaps the trees were smaller. I had thought there was another theater across the street from the Strand but I must have been wrong. I thought it was a busier street with sailors round about. There are stores that must have been lit up. The setting for the Paramount doesn’t seem to fit my impression – with the church across the street.

If you would like to have a few laughs, read my entry under the Plaza Theater in Fall River. My father was mischievous. One night he made the rooster on the Pathe Newsreel crow nine times. Read about his other pranks. He was also The Ghost of the New Bedford Theater — check that one out.

We moved to Los Angeles in 1956 for my father to find work. The more that TV got established, the more theaters were closing and projectionists out of work. I’ll be back there in a few weeks to take a look at this theater — the only one left open, and is of two left standing, that my father worked.

In the October 30, 1961 issue of Boxoffice Magazine, an ad was run showing how many mainstream theatres were showing Federico Fellini’s La Dolce Vita, a subtitled Italian movie. This theatre was one of those in Rhode Island. LINK

When converted to a movie theater in 1919, the building retained the stately columned front from its days as a church. This was modified some time in later years so that it looks as it does now. There is additional history on the official website’s history page.

There is a picture on this webpage of WW I soldiers lined up to see a film at this theater when it was the Strand in 1919, apparently soon after the building went into use as a cinema (scroll down; it’s the last one at the bottom of the page).

The Theatre Historical Society archive has the MGM Theatre Report for this theater when it was the Strand. It’s Card # 530. Address is 49 Touro St. There is an exterior photo made May 1941. Condition is Excellent. It was over 15 years old, and was showing MGM films. There were 486 orchestra seats and 212 balcony seats, total 698 seats.

PHOTO OF STRAND THEATRE IN 1941 MGM REPORT Thanks to Theatre Historical Society of America.

Who is Jane Pickens?

In his 1981 book “Reflections of a Rock Lobster-A Story About Growing Up Gay,” Cumberland RI author Aaron Fricke mentions visiting the Jane Pickens Theatre with friends for showings of “The Rocky Horror Picture Show” and what happened at them.