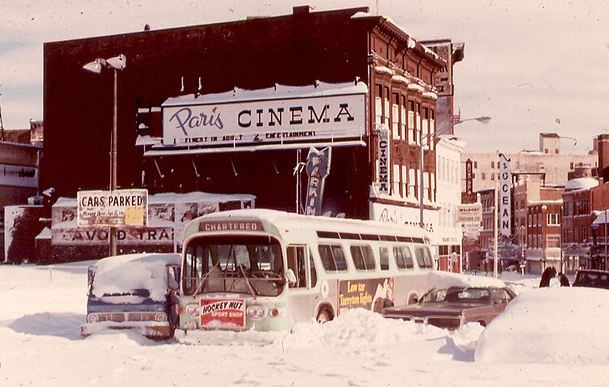 The address for the Paris Cinema(s) was 291 Weybosset Street.

The Paris Cinema opened as a single screen theatre on Wednesday, November 26, 1969. I went to the movie on opening day, The Madwoman of Chaillot with Katherine Hepburn, billed as an exclusive engagement. Screenings were continuous from 12 noon. The cinema was advertised as “The First New Theatre in Downtown Providence in Over 25 Years!” The place subsequently had two screens, but it was not the case of a large auditorium being twinned, just that the second of the side-by-side auditoriums was not ready yet or had not been added yet at the time of opening.

O C Smith sang a lovely tune called ‘Suddenly, It’s All Tomorrow'
for the Preminger film 'Such Good Friends’ composed by R. Brittan, R and Thomas Z. Shepard.
It anyone wants to hear on MP3 I’d gladly send it.

For years this place ran a sleazy ad in the Journal showing a teenage boy naked from the waist up with the banner “Providence’s Gayest Place”.

A Providence Journal article of 6-2-07 wrote of Richard Rose, federal prosecutor in the case that sent major Vincent “Buddy” Cianci to prison on a racketeering conviction:

The dynamic new mayor, Buddy Cianci, who had visions of transforming downtown, was appearing on a television broadcast in Burnside Park, in front of the federal courthouse where Rose would prosecute Cianci years later. Rose went downtown, and tried to present the mayor with his petition, but was unable to.

The young Rose told a Providence Journal reporter at the time: â€œThe mayor is trying to get people into the city. These movies arenâ€™t helping.â€[/i]

Esquire Theaters of America was the original operator of the Paris Cinema, according to Boxoffice of January 26, 1970. The Paris Cinema 2 was under construction at that time, with a projected opening date of February 16.

It was one of three projects Esquire had underway, including an expansion of the chain’s multiplex in East Providence and the Garden Theatre in Boston. The Architect for the Garden Theatre was Burt W. Federman, so it seems likely Esquire would have had him design their other projects as well.