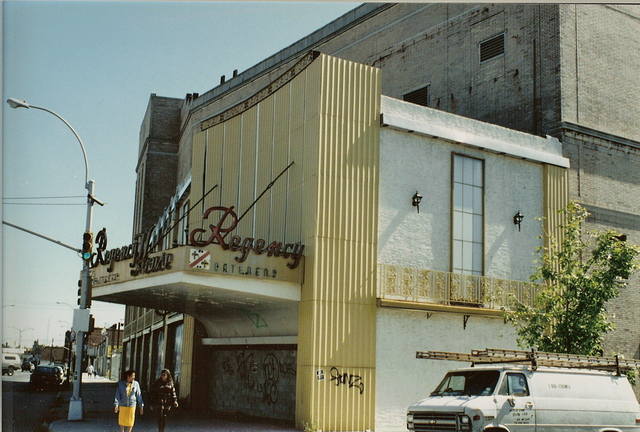 This theatre had several names, starting as the Capitol Theatre during construction in 1926-27 by a real estate developer that hoped to make it a magnet for extending the Jamaica Avenue shopping area beyond its then eastern border of 166th Street in the Jamaica section of Queens. The site was at 175th Street, so the builders had a tough time finding a tenant for the Capitol Theatre, which was designed by Eugene DeRosa and fully equipped to handle any type of movie or stage attraction.

Broadway producer and theatre owner John Cort finally came through with an offer to turn it into a playhouse. Re-named the Cort Theatre, it first opened on August 22nd, 1927, with the American stage premiere of the Broadway-bound “Mr. What’s His Name”, starring Lynne Overman. The plays ran for six days, with Sundays featuring vaudeville. To avoid confusion with the Cort Theatre in Manhattan, the house was soon re-named the Cort Jamaica Theatre. After a year of low attendance, Cort sold his lease to Louis Werba, who launched it as Werba’s Jamaica Theatre on September 18th, 1928, but still with the same policy of stage plays that were either before or after their Broadway runs.

Three months later, the Shuberts moved into Jamaica with a new playhouse at 165th Street, across the street from a huge movie palace still under construction as Loew’s Valencia Theatre. Werba’s Jamaica Theatre held on into 1929, but finally closed soon after the Wall Street crash. The theatre remained dark until September 1, 1930, when it re-opened as the Carlton Theatre, under the management of the Brandt circuit. By that time, the Shubert Jamaica Theatre had folded, so Brandt tried to return plays to the Carlton Theatre, but without suceess.

While sitting vacant, the building’s interior was almost entirely destroyed in a fire. It was finally demolished in 2002.

In rereading the above submission I note that I said I started working for Prudential in 1954, it was actually two years earlier in 1952.
The balcony seats were not used; only the orchestra and loge seats were available. The balcony was closed supposedly because of the condition of the ceiling. The loge, the only section in which smokingg was permitted cost more than the orchestra. An usher was posted in the loge to check ticket stubs to ensure only those who paid the price were admitted. Like all businesses some ushers found a way to suppliment their wages by making the additional collection and pocketing the money rather than send the patron back to the box office.
One afternoon while seated in the loge with a cashier and expressing our feelings toward each other, we were nearly thrown out of our seats when Jack Palance shot Elisha Cook Jr. in a scene in Shane. The roar of Palance’s gun when heard through the theatres sound system was like standing next to the sixteen inch guns on the Missouri when they fired a salvo.

The assistand manager during those days was an Adele Kammerer, known by many and all as “Toots”. She was a wonderful woman who treated the staff as if they were her own. And that meant getting yelled at when you did something wrong.

During the ‘50’s there were still “beat” cops and for some period each day, usually towards the end of a shift the beat cop would spend some time in the back row of the Carlton. If the sector car with the sargeant showed up…as he usually did, the beat cop made a s strategic exit through a side door. We probably broke more fire laws than were on the books, but when the fire inspector showed up for a look see, he’d be kept busy in the office until the ushers quickly (and quietly) took the chains and fire poles of the door locking systems.

Prithcard used to have partys every now and again after closing. We’d all get to gether and some how a couple of quarts of Scheafer beer found their way into the theatre…usaully in the cloak room.
No one ever go squashed and Prithcard never let anything get out of hand. The partys were great for staff morale. Often after closing we’d all go over the Savoy Pizzeria near 177th Street. One of the usher’s was over 18 and would often “borrow” his fathers car a 1939 cream over blue Cadillac in mint condition. We would then either go to the White Castle on Springfield and Hollis for a dozen or so “burgers” or make the trip to Springfield gardens to the “Pizza King”. We wouldn’t be home till nearly one a.m. and our folks would be livid. An number of years later when I began working I worked around the clock and my folks still hated when I worked twi-lights.

We had a chap who managed the ACE in Ozone Park who would often stop by around close to join us for pizza or burgers. He had nifty custom Ford hot rod with exhausts that purred and roared depending on the accelleration. We knew him simply as “Johnny from the Ace”.

We had three projectionists. One who worked full time for Prudential and two who “moonlighted” from other theatres. One; used to walk around the booth in his shorts during the summer.

Back in the fall of 1993 I snapped this photo of the former Cort/Carlton while it was still operating as the Regency Catering Hall. Actually, now that I think about it, I can’t say for sure it was still in operation, but the signage was still there.

I was driving around taking photos of old movie theaters that day (also got the Queens, Community Twin, Mayfair, Valencia and Flushing Kieth’s and will post images soon) and saw the Regency on Jamaica Ave between the Valencia and Community. At the time, I didn’t know for sure if it was a former theater, but it had that look about it. It wasn’t until I started poking around this site in the past 3 years that I learned of its history.

Great stories by Usher back in 2005. I used to frequent all the Jamaica Ave. theaters in the late ‘50s & '60s but missed the Carlton, which closed just before my moviegoing days began. Remember it as the Regency Caterers and was always curious about its earlier theater history.

Hmm. Dorsey, the Andrews Sisters… Seems bookers at the old Carlton sure gave it a good solid try with acts of that caliber.

View link
Check out this link for an exterior photo of the Carlton.

Nice photos of the Carlton Warren.
Quick question about the photo carlton3.jpg. Looking at the edge of the balcony, theres several faces that appear, any knowledge of who they may be?

In the early 1950s, The Carlton had a way to lure customers beyond the reach of the Jamaica Ave “El”: the cheapest prices. I remember it costing kids 9cents for double bills of films that were reasonably recent but a month or so later than the major theaters. Between the Carlton and the Savoy, Jamaica had veritable “repertory
programing"enabling a movie fan to see favorite films for years after they opened at the major theaters.

From the description above the date narrows down to Nov. 1927-March 1928; probably Nov 1927 since there are still leaves on the ground.

The building was demolished and a school sits where it once was. I attended several functions as a child in the 1970’s when it was a catering hall. It closed in the early 1980’s and fell into disrepair.