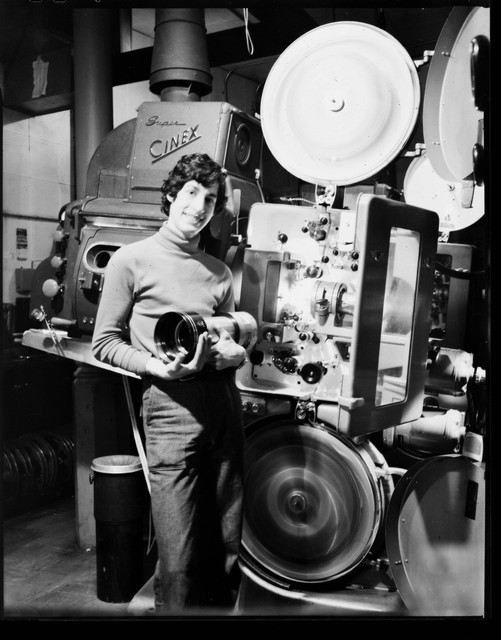 In November 1947 it was remodelled to the plans of architectural firm William Risemen Associates, and reopened as the Astor Theatre. One of the premiere first run movie theatres in Boston’s past. It was located opposite the Boston Common on Tremont Street. It was where De Mille’s “The Ten Commandments” played in the 1950’s.

When it was the Tremont it was one of the first theaters to get electricity. When they started running movies they were one of the first theaters to have motors on the projectors. As the Astor CinemaScope was replaced by Todd-AO in 1959. The company supervised the install the auditorium was widened by removing the queens boxes stage and proscenium. A new projection booth was built in the balcony. The projection lenses were custom made by American Optical. There is a picture posted of David K holding an American Optical projection lens. They opened after the 1959 remodel with Porgy and Bess in Todd-AO.

Instead of doing an extensive remodel Ben Sack just put the screen on the stage and Todd-AO projectors in the booth. The two other Todd-AO theaters in 1959 were the Saxon and the Gary. Condemned as stage theaters Ben Sack picked them up cheap and installed Todd-AO in both. The Astor had incredible picture and sound and Ben Sack hated the fact. They were also very good at booking some big pictures. The Astor was a roadshow house. Up until 1970 when they were shut out of the market Sack started block booking every movie that came out. In the ten years from 1960 to 1970 they ran just one film with optical sound and that was Dr. Strangelove and it was shown 1:66 not 1:85. With a movable masking top and sides any aspect ratio within reason was possible. The 70mm picture and sound was incredible 13.6 carbon arcs Todd-AO projectors with American Optical lenses those Altec speakers and tube sound system sounded sweet.

The stage floor, proscenium arch and side boxes were removed years prior to 1959. Possibly as early as the late-1930s, or in 1947. I first went to the Astor in the early-1950s. It was what was known as a “draped house” – the entire front half of the auditorium was covered in long, dark drapes. The screen was on the rear stage wall, and where the stage and orchestra pit had been, there were rows of seats.

1950 that was a long long time ago. Pictures would be nice. The Point I was making is the Todd-AO conversion was a major install. Did you see some of the roadshows like Spartacus. Dr. Strangelove 2001 when it was released to general release. Ryans Daughter ran there and about 20 feet of the end credits was sitting in the parts cabinet until the theater closed.

The theater was old very old. The electric and steam for heat came directly from Edison there were no meters just a flat fee. There were electric meters in the basement but they were for DC and no longer in use. The theater itself was a fire hazard. There were sprinklers and a fire call box in the theater that was wired directly into the fire department. It was an automatic four alarm fire if there was a fire. There was a lot of old dry wood. The side walls were brick while the the rest was wood. There had been several fires in the theater before the fires that destroyed it.

Yes,the Astor was very old (1889). I admired it on the outside, on Avery Street and the wide alley which ran along its east side. As a kid, I had an interest in old theatres and rail stations. I thought the Astor was really interesting, until I bought a ticket and went inside. What a disappointment ! (I was about 15 at the time). There was a fire (not major) inside about 1915, and one or more small fires in the outer lobby circa 1980. During demolition you could see traces high up on the auditorium walls of some fancy gilt decoration.

Boston theatre histories credit the Tremont/Astor as the first building in Boston actually designed from its outset for stage performances. Seems incredible all the interior changes to it were never documented as it transitioned to film presentation. At least we still have the Colonial and the Majestic as living history. Thanks to all who shared memories of the Astor.

RogerA: It seems highly unlikely the Astor (or any venue) would’ve booked only prints with a magnetic soundtrack for an entire decade (save for the one example you cited). Even the Gary, which played more roadshows than the Astor, didn’t play mag exclusively. I think the closest example of a decade’s worth of mag-only titles would’ve been the Boston Cinerama.

Go back and check the records like I did and see what you can find but they ran a lot of 70mm in those ten years. Spartacus, Ryan’s Daughter, The Ten Commandments (re-release),2001 House of Wax 70mm 3D I’m not sure what CinemaScope movies they ran but it was common practice for A class theaters to get a print with mag sound. There was a mag only print of The Exorcist that played at the 57. The Gary ran a lot of mag it might have all been mag or 70mm. I know for a fact there were mag prints of Mary Poppins. It didn’t have to be roadshow to have mag prints. Mag was really popular in that era especially in the cities.

The mag pickup heads at the Astor were worn down to where they were flush with the plastic 35 and 70 on both machines. The only mag heads in good condition were the ones made special for House of Wax. The four track 35mm heads were worn worse than the 70 heads no high frequency. The original mag heads from the Saxon and the Gary were worn down to nothing too.

The Astor was the only theater where the 70mm picture was wider and taller than the Scope picture. The liked to book 70mm pics there but it was obvious they ran a lot of 35mm mag films too.

The Astor’s 70mm and roadshow engagements are noted in this new article on Boston’s large format and roadshow history.

Good list. There was a lot of mag back in the day.