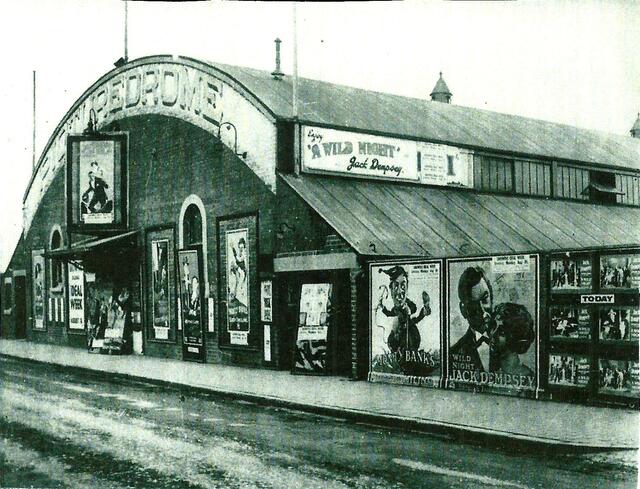 Situated in the Staffordshire town of Burton-upon-Trent, the building that was converted into the Picturedrome started life as a roller skating rink. It was of very basic construction, with a curved corrugated iron roof.

In the very early days, films were shown ‘across’ the rink, at right-angles to the length of the building. Then, on 11th March 1913, a new company, Burton on Trent Picturedrome Ltd., was registered, and the newly created Picturedrome had its Grand Opening on Saturday 27th September 1913 at 2.30pm. Among the opening attractions were “The Rival Airmen”, said to be the ‘star film’, a drama, “On the Brink of Ruin” and a comedy, “The Amateur Plumber”.

There was a modest orchestra, and variety acts appeared on stage to ‘fill in’ while the film reels were being changed.

On 15th November 1920 an organ, acquired from a London church, and installed to the left of the orchestra pit, was opened by organist H. A. Clarke.

In October 1929, in a rather unusual, but far-sighted, move for the period, adjoining land was acquired and converted into a car park. Perhaps not entirely coincidentally, ‘talkies’ arrived soon afterwards, on Monday 4th November 1929, with “The Broadway Melody”, starring Bessie Love and Anita Page.

However, the Picturedrome was beginning to show its age. Rather than updating it, the building was demolished and replaced by the New Picturedrome, later Odeon (see separate Cinema Treasures entry).

The final feature at the Picturedrome, on Saturday 8th August 1931, was “Hot Curves”, starring Bunny Rubin, supported by Slim Summerville in the short “Stay Out”.