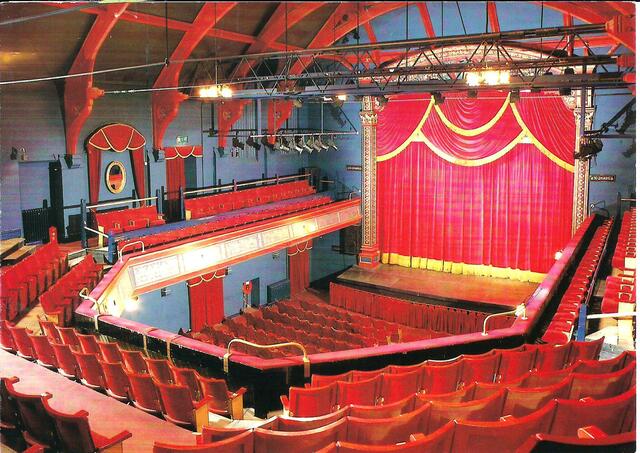 In Chesterfield, Derbyshire, the Stephenson Memorial Hall was built in 1879 at a cost of £13,000. Reconstructed and enlarged in 1898, it was used for a wide variety of lectures and entertainments, including lantern slide shows and cinematograph presentations.

In July 1910 the hall was closed, to be converted into the Corporation Theatre at a cost of £2,000. A new, raked, floor and an orchestra pit were installed, as was a projection box at the back of the stage for rear projection. The proscenium was widened from 26ft to 30ft, while the stage remained 48ft wide and 35ft deep.

The Grand Re-Opening was held on Monday 5th September 1910, with George Alexander starring in the play “The Thief”. A mixed programme of live shows, films and lectures was then presented.

The Corporation Theatre closed for about a week in late-October 1931 so that a BTH [British Thomson Houston] sound system could be installed, re-opening on Monday 9th November 1931 with “Dance Fools Dance”, starring Joan Crawford. Stalls seats cost 7d, 9d and a shilling, with balcony seats costing 1/3d.

The theatre ran mostly on films up to and during World War II. After the war it reverted to plays and other live entertainments and, in 1948, proposals were put forward to convert it into a municipal theatre.

The Chesterfield Civic Theatre was duly opened by well-known film and stage actress Kathleen Harrison on 19th February 1949. It was the first municipal theatre in the country following legislation brought in by Atlee’s post-war Government and originally offered a repertory programme of a new show each week.

That policy continued until August 1965, when “Lady Windermere’s Fan” heralded a new policy of each production playing at least two weeks.

In March 1981 “Joseph and the Amazing Technicolor Dreamcoat” played to the theatre’s record attendance: three weeks at an average of 98% capacity. However, that was soon followed by the ending of the repertory seasons.

In June 1982 it was renamed the Pomegranate Theatre.

In May 1989 the theatre closed for major structural repairs. It was re-seated in January 1994.

It is owned and managed by Chesterfield Borough Council as Chesterfield Theatres, which comprises this theatre and the Winding Wheel Theatre (the former Picture House/Odeon - see separate Cinema Treasures entry). In addition to the live shows, the Pomegranate Theatre’s offerings include Pomegranate Screenings, a programme of films and satellite broadcasts.