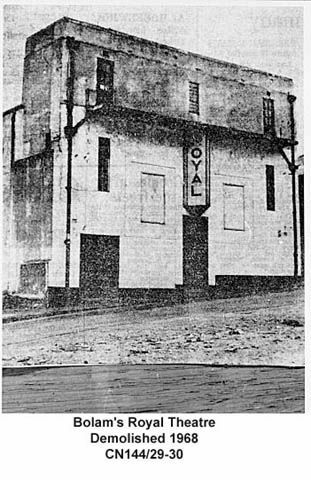 Located in Birtley, 4-miles south of Gateshead, County Durham. The Theatre Royal was opened in October 1910. It was conversion of a former chapel. It had a 23ft wide proscenium, the stage was 15ft deep and there were three dressing rooms. In 1911 it was severely damaged by a fire, and operations were transferred to the closed Co-op Hall. It was quickly rebuilt in 6-weeks and was reopened.

Around 1930 it was equipped with a British Thomson-Houston(BTH) sound system. Later replaced by a Western Electric(WE) sound system. The Theatre Royal was still open in 1947 and by 1950 it was operated by the same operators as the Apollo Cinema, having been re-named Royal Cinema. Still open in 1954, it had closed by 1958 and became a confectionary warehouse. It was demolished in 1968.

It became a confectionery warehouse in 1965, demolition came in 1968.