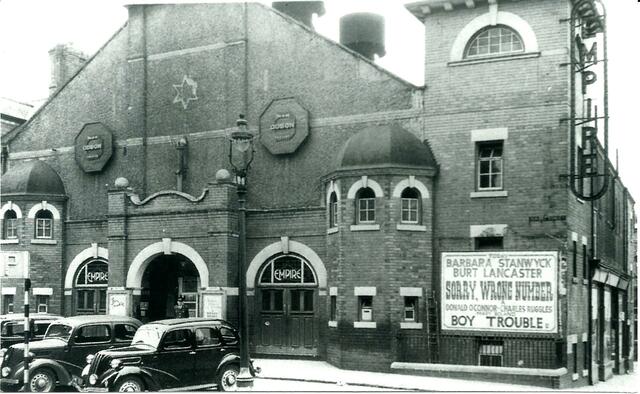 In the centre of Darlington, County Durham, at the junction of Quebec Street and Crown Street, the Empire Picture Theatre opened on 23rd June 1911. The owners were Standard Electric Theatres, but it was leased to Picton Cinema Company, of Cardiff, prior to opening. Some variety acts were presented. There were 1,200 seats.

In 1913 the cinema was acquired by Darlington Cinematograph Company Ltd.

The ‘talkies’ arrived in August 1929, with a Western Electric(WE) sound system and “The Singing Fool”, starring Al Jolson.

By the late-1930’s, presumably due to fairly major refurbishment, the seating capacity had reduced to 890.

The Empire Cinema closed on 5th November 1960 by Circuits Management Association(CMA) soon renamed Rank Organisation. The final programme was Jack Hawkins in “League of Gentlemen” & Ruth Dunning in “And Women Shall Weep”. It was demolished in 1973. A Wilko store stands on the site.

The last programme at the Empire was ‘The League of Gentlemen’ supported by ‘And Women Shall Weep’ (presumably second run to the town’s original Odeon, the former Majestic) as per image uploaded to the Photos section. What excellent value for money the final week’s patrons had!

The Empire’s disposal by CMA (Rank) still left that company with two venues, namely the original Odeon (not the former ABC which sports the name - at the moment, at any rate….) and the Gaumont (former Alhambra). In addition to the aforementioned there remained the ABC Regal (the remodelled Theatre Royal and the town’s largest venue) and the old Scala on Eldon Street bringing the number of survivors to four in total. My town of birth, nearby much smaller Bishop Auckland, still retained its four cinemas at this time and I often wondered why Darlington, in stark contrast, had so many early cinema casualties.