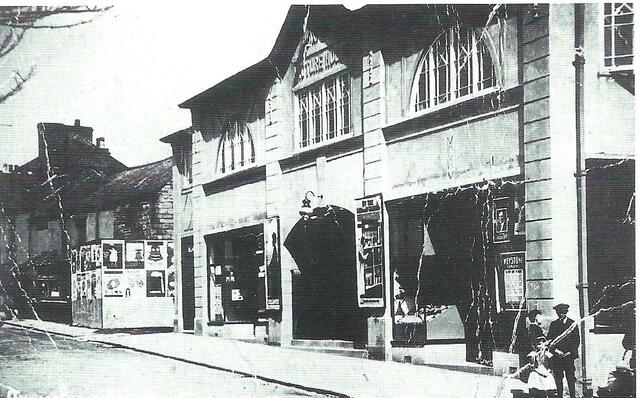 Located in the village of New Whittington, nowadays a suburb to the north of Chesterfield, little is known about the Oxford Picture Palace. Indeed, the (usually very extensive!) Archive of the Cinema Theatre Association only contains one photograph and one press cutting. So I have constructed this chronology almost entirely from listings in the Kinematograph Year Books. The dates below, therefore, refer to editions of those books.

According to the caption for the photograph, evidently from a book of old Chesterfield photographs, this cinema dates from “the 1920’s”. There is no reference to the Oxford Picture Palace in the 1914 KYB; the first available edition I have is from 1923, when it was owned by Oxford Palace (New Whittington) Ltd., the resident manager was Percy Merrick and there was one show nightly, with matinees on Tuesdays and three shows on Saturdays.

In 1935 the seating capacity was mentioned for the first time: there were 650 seats.

This had reduced to 500 by 1942. That edition also listed a 12ft deep stage and two dressing rooms. By 1947 there were four dressing rooms, and a “hall attached” (presumably the former billiards hall). Depending on when the first of these dressing rooms was constructed, it would appear that variety acts formed an important part of the programming, both in the early days and also, quite possibly, much later.

In 1954 the screen was listed as being 16ft wide, while the proscenium was 22ft wide. The seating capacity had reduced to 460 (it was still 500 in 1953) but this might have been as a result of work to install CinemaScope, as the following year, 1955, lists the screen as being 26ft wide, and the proscenium 29ft wide.

Sadly, this was not sufficient to save the cinema. Still with its original name of Oxford Picture Palace it closed, according to the photograph caption, in June 1956. Indeed, it is not listed in the 1957 KYB.

The building went over to commercial use. In October 1990 the Derbyshire Times reported that residents had complained that Volly Motors was trading from the premises, and creating a noise disturbance, despite their “temporary consent for light industry”, which had been granted in 1970, expiring at the end of 1974! (Company boss Gustav Volli said that, as he hadn’t heard further from the council, he had assumed full, permanent consent had been granted!).

It is not known when Volli Motors moved out, but the premises are now occupied by double gazing installer Fairdeal Windows - who, in a lovely touch, proudly include “Old Oxford Cinema” in their address!