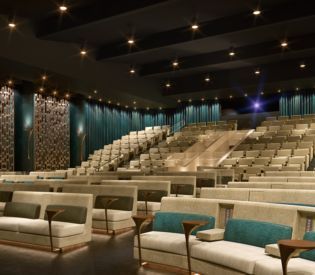 This venue was originally constructed as a two-screen movie theatre, the Sack Cinema 57, located on Stuart Street near the heart of the theatre district. The Sack Cinema 57 opened in late-December 1971 with “The Gang Who Couldn’t Shoot Straight” in one screen. The second screen opened about a month later with “The Hospital”. Here Alfred Hitchcock appeared in person to introduce his film “Frenzy” at its world premiere on June 20, 1972. The twin theatre showed films for more than two decades as part of Sack Theatres chain. Loews, having taken over what had been Sack Theatres, closed the theatre in May 1996.

It became the Stuart Street Playhouse in one of the former screens, used for live theatre productions. In the other former screen it was used as an indoor golf school for several years.

The theatre closed as a live stage venue in the spring of 2009, but became a cinema again on October 30, 2009, keeping the name Stuart Street Playhouse. The opening movies were “Paris” and “The September Issue”. Half of the original Sack 57 is reused as this 435 seat cinema, which from June 2011, was repurposed for special events and ocassional film show & film festivals. In 2012, this theatre was redesigned as a 225-seat multi-event venue and has been renamed Theatre 1. The other auditorium which once seated 800, and was later converted into a golf course, in 2012 was beautifully renovated and converted to a ‘blank canvas’ room called Space 57 that can hold 900 people for stand-up receptions or 300 for sit-down dinners.

I Remember standing in line on a cold night with about 10" of snow on the ground to see the Exorcist here. It was cold about 10 degrees and as the line started to move we got close to the front and they put up the SOLD OUT sign. We had to wait in line for the next show or go home. My wife and I stupidly waited in line for over 2 hours with hundreds of other people. We were all cursing ourselves. Once we got in I don’t think we ever warmed up But it was worth the wait. This Cinema duplex was a wonderful theatre. I was hoping they would remodel it back to a duplex. Now what I see is they are making it smaller. What a shame. That leaves no more cinemas left in Downtown except for the Lousy Lowes Common multiplex,. What a shame.

Reebok held a sales meeting in the theater very recently. It was mentioned in today’s Boston Herald which states that the meeting took place in “Theatre 1”, this theater’s new name.

Ahh the good old days. I was in charge of the booth and operators at the “57” when the Exorcist" opened, which was on Christmas Day (of all things). We had to do the press screening for reviews on Christmas Morning (I had to screen it for them as my other operators refused to come in) and for the first few weeks the place was insane with people passing out and “heaving” during the show. It looked like every movie patron in the world wanted to attend, the crowds were massive which caused the shows to start late. Oh and “The Sting” (playing at the same time in cinema 2) did poorly as the folks that wanted to see it could never get close enough to the theater to purchase a ticket.

The crew did a terrific job keeping the place running and we all pitched in to help each other. Those were good days!

First screen space is now called Theatre 1, (www.theatre1boston.com) and seats 208; very nicely renovated as a cinema, which is available for rental for screenings and meetings. They also have a once-a-month movie/dinner night “Reel Chefs” involving a classic movie and gourmet dinners.

Second screen space is now called “Space 57” (www.space57.com) and is available for rental as a flexible event room which can accommodate up to 900 patrons. This is also very nicely renovated, in a light hued well lit manner.

Their floor plan (http://space57.com/floorplans/) shows the layout for both screens. Interesting to see the overall layout. – it looks like you entered from the street and the two cinemas stretched off to the left and right of the lobby – the screens are 180 degrees opposed. Interesting layout. The building is associated with the Revere Hotel Boston Common which appears to be connected.

It’s great to see the entire facility is now renovated and open!

@David 192: You ran “The Exorcist” on its Christmas day screening? Nice to know. I was Sack’s publicist whop sat among the 15 or so reviewers there. Talk about a super private showing. We had no idea what was going to explode the next morning at 10 AM. Thank you for setting up a great show — the print was 35mm mono mag, if I recall. — Nat

Wow! That takes me back Nat. I think it was a three track mag print, nothing recorded on the surround. If you recall, “The Sting” opened at the same time in Cinema 2 and nobody could get to it for a few days. I remember Dave Traister (spelling?)calling me to come down to help direct people traffic coming in to see “The Exorcist” and I think he was on crutches. The shows started later and later because we had so many people trying to get in. Just amazing. I think I remember you. If you get a chance, write me at

Was also used as the room for exhibitor screenings where theater chains would put in their bid to play a film after seeing it since Boston had an anti blind bid film exhibition law.I recall seeing Raiders of The Lost Ark weeks before the public would see it. Even saw Star Trek II The Wrath of Khan in an incomplete version with The Enterprise attached to attached to a long rod so it could be moved onscreen

The Cinema 57’s 70mm engagements are noted in this new article on Boston’s large format and roadshow history.

Does anyone know if this is still operational? I was checking links on my website today and their official link now goes to a generic page on how to use Instagram…