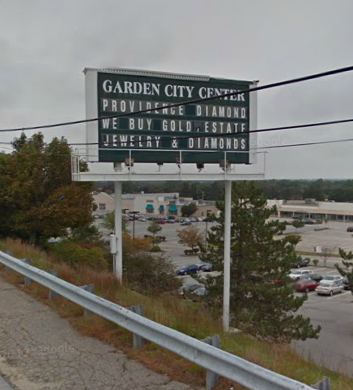 The Garden City Cinema was built in the late 1960s as part of the General Cinema chain. It opened as a single screen house but was twinned about a decade later. It ceased operations in the mid-1980s to be replaced by a shopping center which is an extension of the shopping area in Garden City, a thriving district of the city of Cranston.

Amusingly enough, the Cranston Public Library, directly across from where the Garden City Cinema used to be, has a video copy of Rachel, Rachel in its collection.

The theatre was twinned in the fall of 1972 with auditoriums seating about 500 each.

Here is a newspaper ad for the opening day of the Garden City Cinema on December 22, 1967. It includes a small photo of the theatre front.

I didn’t realize it was twinned as early as ‘72, but I seem to remember going here when it was a mammoth single-screen theatre so it must have been before that.

What I remember is that when it was twinned, it was a weird configuation. If memory serves me correctly they essentially cut the theatre in half, running a wall down the middle of the theatre, putting two screens up where the single-screen was. Someone likened watching a film in the twinned Garden City Cinema to being in a wind tunnel.

I worked at Garden City Cinema from August 1984 until it closed in April of 1986. General Cinema was losing to Showcase at the time, and all of the “blockbusters” used to go to Showcase. In the final year, attendance was extremely poor (mostly less than 5 patrons on weeknights) and sometimes less than 50 per showing on weekends. Talk was that the theater would become second-run, but it was decided just to close. The theater and neighboring bowling alley were destroyed, and Shaw’s and a mini stripmall were erected. The Shaw’s was demolished in 2007, and a Whole Foods was built on the site.

I do have a lot of memories of the Cinema. My e-mail is “”. I would love to hear from anyone interested, especially Gerald A. DeLuca! Please put “Garden City Cinema” in the subject line so I don’t delete is as spam!

I met Stephen King and George Romero at a screening of Creepshow there in 1982. My uncle Owen Haskell took me to these things on a regular basis and made me the movie buff I am today! Thank god for this page!!!!

The former marquee for the theater, by the intersection of New London Ave and Sockanosset Crossroad was later repurposed and refurbished for use as a marquee for Garden City Center itself.