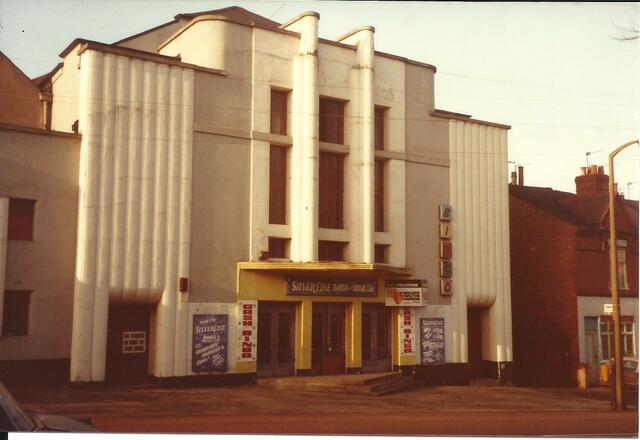 In Ilkeston, Derbyshire, the Theatre Royal opened on Monday 23rd December 1895. The proprietor was H. Vincent Clarke. The theatre was designed by architect W. Dymock Pratt, and had seating in pit, pit stalls and circle, with two private boxes at circle level, and could accommodate 2,000 patrons. The stage measured 50ft by 38ft. In 1910 Architect H.S. Hearn was employed to carry out alterations.

There was a succession of owners until, on 31st July 1911, the Theatre Royal was acquired by Leon Vint. He renamed it Vint’s Electric Picturedrome and introduced a mixed programme of live shows and films.

After World War I, a certain Grace Stansfield appeared in a touring musical, “Tons of Money”. She went on to find fame as Gracie Fields. Also at this time it was briefly known as the Coliseum. However, it soon reverted back to its original name.

The ‘cine-variety’ programme continued until 1929, when on 7th October that year, “Black Waters”, starring James Kirkwood heralded the start of the ‘talkies’. The initial sound system is thought to have been Marshall sound-on-disc.

In September 1931 Reginald Kemp acquired the Theatre Royal, and changed its name to the New Theatre. The theatre was redecorated and refurbished, but then taken over by the Ilkeston Cinema Company at the end of June 1932. The theatre re-opened on 4th July 1932 with “The Lady of the Rose”, starring Vivienne Segal. The original sound system was replaced by Western Electric(WE) sound-on-film.

CinemaScope was installed in March 1954.

On 1st July 1963 the New Theatre closed “for the summer season”, with the intention of re-opening in September. During that period Bingo Enterprises Ltd. offered to purchase the theatre and re-open it as a bingo hall; their offer was accepted.

The New Theatre re-opened on bingo in December 1963. This continued until 1982, when the building fell into disuse.

An application, submitted in 1989 to demolish the theatre and redevelop the site, caused an outcry from various organisations in the town which had, frankly, sat back and done nothing while it deteriorated. To be fair, at the last minute, a local amateur dramatic group, the Studio Players, did try and raise the £200,000 purchase price, but there was insufficient time. The building was demolished in early-1990. Haddon House Care Home stands on the site.