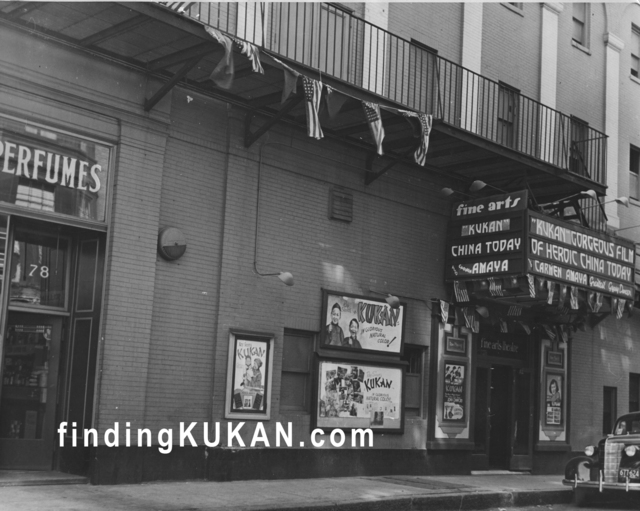 The Fine Arts Theatre was a repertory cinema whose entrance was on a side street around the corner from the Loew’s State Theatre on Massachusetts Avenue. It was up one flight and was a jewel-box of a theatre.

It operated well into the 1960’s and specialized in double bills of foreign films and classic American movies as well. It had been originally used as a theatre for Jewett Repertory Company.

In his book A Life in the 20th Century, historian Arthur M. Schlesinger, Jr. writes a chapter on what he enjoyed while at Harvard in the 1930s. In this quoted paragraph, he tells of seeing movies at the University Theater in Cambridge and the Fine Arts Theatre in Boston:

“Came the talkies. The University Theater in Harvard Square was a constant refuge. So was George Krasna’s Fine Arts Theater, near Symphony Hall in Boston. Here one saw the great UFA movies from Germany – von Sternberg’s The Blue Angel, Fritz Lang’s Metropolis and Die Frau im Mond (By Rocket to the Moon, both feeding my fascination with the future, and his powerful and scary M, with Peter Lorre as the child murderer. Here too one saw lighthearted German musicals like Erik Charrell’s Congress Dances and William Thiele’s Die Drei von der Tankstelle, where I acquired an early enthusiasm for the ravishing Lilian Harvey, English by birth but a great favorite in pre-Hitler Germany.”

Hi, My band, “The New Life” was the last show at the theater. We were part of Al Rubin’s “The Third World Raspberry” psychedelic light show. We played the last two nights. Just thought I’d let you know.

Do you remember the dates?

The Fine Arts Theater was on 80 Norway Street, off Mass Ave. and it was owned by the Christian Science Church accross the street. The legitimate theater was closed for many years and it was turned into a cinema and operated by Steve Prentoulis in the 60’s and 70’s. This was the guy who made the cinema famous by playing a double feature “art films” twice a week. He also owned and operated The Symphony Cinema 1 & 2 on Hunington Ave. across the street from Symphony Hall.

from Boxoffice Magazine, April 23, 1938:
Fine Arts Marquee.
BOSTON – A new marquee has been put up at the Fine Arts Theatre. It was designed and executed by Leonard Krasna, assistant manager at the house. He was aided by Edward Cincotti and William Harvey.

Re: “The bad thing about the information is that it’s usually wrong or incomplete.”

Can you tell us specifically which information now on this page is not correct? Thanks.

From The Theatres of Boston, by Donald C. King:

In October, 1922, the 656 seat Fine Arts Theatre opened as an upstairs house that was part of the uptown Loew’s State Theatre building with an ‘around the corner’ entrance. It had a small be fully equipped stage, planned as a rehearsal stage. It was Boston’s first art film house, opening with a British import."

Hedda Gabbler opened Oct 22, 1922, put on by the Henry Jewett company. Mr Jewett had run a company at the Toy/Copley sq. theatre in the late teens.

Also from King’s book: in 1958, Sarah Caldwell, director of the Boston Opera Group, moved in to the refurbished Fine Arts, then the Little Opera House.

I noted in my diary on September 28, 1962 (50 years ago today) that I went to a double bill here at the Fine Arts: Kurosawa’s “Rashomon” and Fellini’s “La Strada.” I also noted that they served (complimentary) small cups of Bolivian coffee.

The last night of the Fine Arts Theatre.. https://i.imgur.com/0l8DxyZ.jpg

I found this wedged inside a book purchased on ebay.