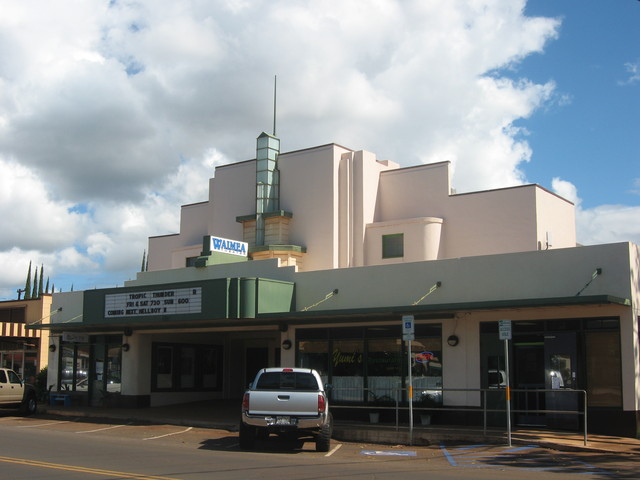 Originally opened September 2, 1938 with “Josette” starring Robert Young, Simone Simon and Don Ameche at a cost of $25,000. Local contractors were used to complete the theatre which was designed by Fred Fujioka of Honolulu. The interior and exterior boast modest deco elements. The original seating capacity was for 500.

The Waima Theatre was closed in 1972, and converted into a warehouse & retail use. Unfortunately the original marquee and other exterior elements were destroyed by hurricane Iniki (1992). The West Kaua'i Main Street leased the building in 1993, after hearing the owner wanted to tear it down. Nearly seven long years of perseverance & patience then went into the saving and restoring the landmark theatre. The project design architect was Lloyd Sako. The grayish blue and tan auditorium features a big screen, state of the art sound system and rattan loge section.

The Waimea Theatre was reopened in August 1999.

This landmark theatre was the first on Kauai to have an electric lit marquee. This is the last single screen theatre on Kauai operating (The Aloha Theatre in neighboring Hanapepe sits in ruins, the Lihue Theatre in Lihue has been reused as housing although its marquee has been incorperated into the new building design).

My photograph of the WAIMEA.
www.flickr.com/photos/lastpictureshow/307398635

Sorry, the previous link did not take you the photo of the Waimea…I’ll work on that. Apologies!