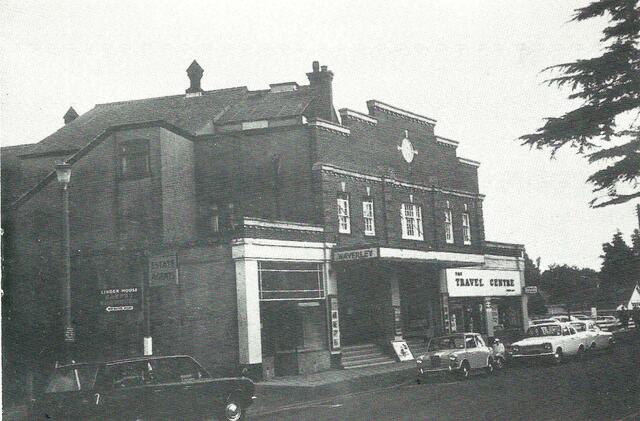 In the small town of New Milton, on the Hampshire coast, midway between Chichester and Lymington, the Waverley Cinema, a large, purpose-built cinema, opened in 1929. It was located at the corner of Station Road and Waverley Road. It had a British Thomson Houston [BTH] sound system.

The first time anything more than the cinema’s name was listed in the Kinematograph Year Books was in 1944, by which time the Waverley Cinema was controlled by Mayfair Circuit (Control) Ltd., Park Lane, London. The seating capacity was listed as 600. Western Electric sound had replaced the earlier system.

By the 1948 edition, the proprietor was listed as Raymond Stross Theatres Ltd., Leicester Square, London. By 1953 it was Waverley (New Milton) Ltd., Pewsey, Wiltshire. In 1955 a proscenium width of 26ft was listed, together with a screen size of 25ft by 11ft. There was a café attached. By 1957 the seating capacity had reduced to 582; it had further reduced to 535 prior to closure.

In December 1958 the manager, J. Plank, reported serious problems with seat slashings, with some 50 to 60 seats damaged at a cost of around £20. The seat arms were also being damaged, so the padded arm rests were being replaced by wooden ones, but even these were being cut.

By 1970 the future of the Waverley Cinema was in the balance. Bingo had been introduced part-time, and the proprietor won an appeal against a refusal to allow demolition of the cinema and the construction of a supermarket.

The Waverley Cinema’s final performance eventually came on 17th September 1972, with a screening of the epic comedy “Those Magnificent Men in their Flying Machines”, organised by New Milton Round Table in aid of the New Forest and District Society for Mentally Handicapped Children. Around 400 patrons attended, and over £200 was raised.

The building was duly demolished and, rather than the supermarket, a block of flats named Waverley House were built on the site.