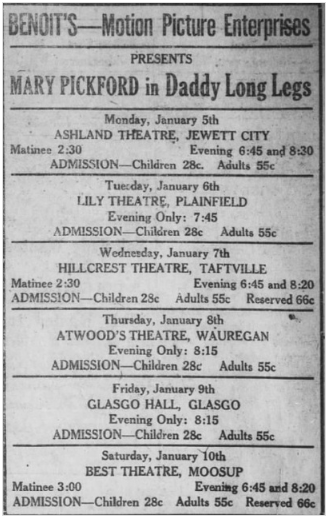 In 1908 Frank Larose erected a 29 foot by 65 foot structure adjacent to his drug store for the purpose of exhibiting motion pictures. In 1916 he leased a building which had been used as a saloon to A. Benoit & Co. for use as a motion picture theatre. Benoit & Co. was already managing the Hillcrest Theatre at Taftville, the Lily Theatre in Plainfield and the Atwood Theatre at Wauregan.

Information is sketchy as to whether this location was the same as the original space erected by Mr. Larose.

After extensive renovations the new theatre opened in 1917, as the Best Theatre, and lasted for less than two years. Projectors were removed and installed in the People’s Theatre.

By 1921 the Best Theatre had been reborn and featured the film “The Love Flower”.

In 1929 it was announced that after enlargement of the projection booth and the installation of a new screen and a ventilation system a projected May opening featuring talking pictures was expected.

On February 1, 1934 a fire started at the rear of the Best Theatre and took out the theatre and a number of other businesses and dwellings.

On March 1, 1934 it was announced that a new theatre would be built, the Moosup Theatre (it has its own page on Cinema Treasures).

Uploaded a January 1920 ad. Interesting how they just list the one pictures and when it’s scheduled at all of their theatres during the week.

The Atwood’s, Ashland and Glasgo Hall theatres mentioned in the ad are not on Cinema Treasures. They were probably venues in company buildings at the textile mills. The local historian can find no references to them.