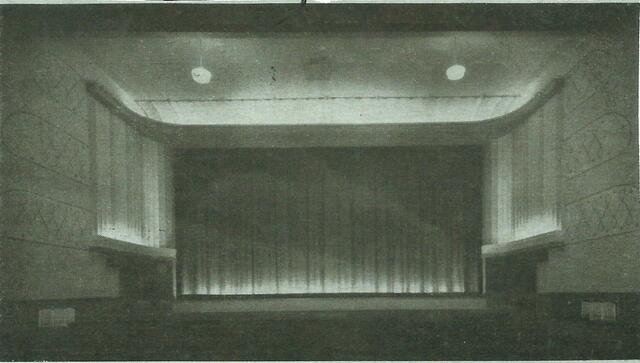 In the small Cornish seaside resort of Perranporth, to the south of Newquay, the Palace Cinema opened on 5th August 1929. There was a 20ft deep stage, an orchestra pit and two dressing rooms for the occasional variety shows. The proscenium was 20ft wide. It was equipped with a Brown sound system (locally made?)

There were initially 296 seats on a single floor, but a later alteration added a balcony with 72 seats.

The Palace Cinema was owned by Messrs. Menadue and Thomas, but soon sold to Rowland Hill, then, by 1935, to W. Dowling, by 1949 to Riviera Cinemas and, by 1954, to J. A. Makinson. By 1949 the seating capacity was being quoted as 400. It had been equipped with a British Acoustic(CA) sound system.

CinemaScope was installed in 1955 during modernisation which also resulted, of necessity, in a wider proscenium, of 30ft, to accommodate a 22ft wide screen.

By 1964 the seating capacity had reduced to 345 and the cinema had been acquired by H L & G Walters. It is not listed in trade directories after that year, but the Palace Cinema was still screening films in May 1965, with bingo played on a Monday.

The building eventually became home, presumably at different times, to an indoor model car racing circuit and an indoor market. It was demolished in the 1990’s and has been replaced by Hanover Close housing development.