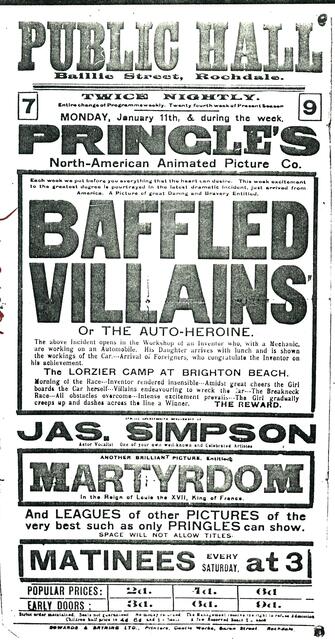 In Rochdale, Lancashire, the Public Hall was constructed at the end of the 19th century.

The first known use of the Hall for cinema shows was when, as reported in Bioscope magazine on 24th December 1908, “at the Public Hall, Rochdale, the beautiful picture "Two Little Shoes” is well screened at this hall, and patrons are going into raptures over it".

From Monday 11th January 1909, for the week, as shown in the advertisement held in the Cinema Theatre Association Archive, shows were being presented by Pringle’s North-American Animated Picture Company.

On 29th July 1909, it was reported that A & H Andrews were presenting films there. James Pringle was mentioned in 1914. Then, in 1915, the Hall is first listed as a full-time cinema, the Public Hall Picture House. It was by then operated by Mr F. P. Beauchamp, and had 900 seats.

In January 1922 the cinema was acquired by Jacksons Amusements Ltd. and renamed La Scala Cinema.

Music accompaniment was provided by Mr C. Cryer on what was described as a “cinema pipe organ”.

It is believed La Scala Cinema closed in the early-1930’s, not having been wired for sound.

The Hall was eventually demolished in the 1970’s or 1980’s as part of area redevelopment.