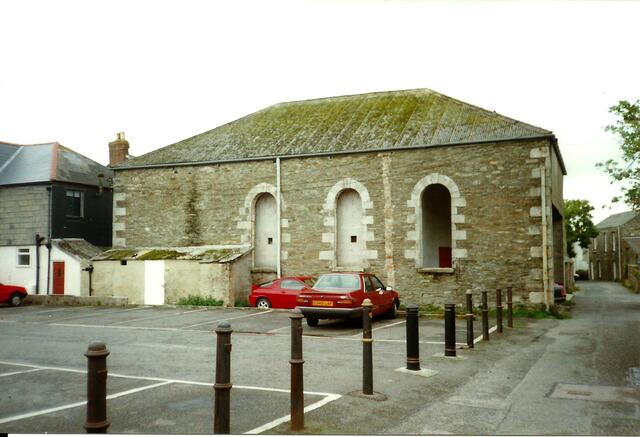 In St. Columb Major, 8 miles east of Newquay, in Cornwall, the short-lived Trevelyan Cinema operated in the hall next to the Wesleyan Trevelyan Chapel.

It appears to have opened in the early-1950’s, possibly as a replacement for the Chapel Bungalow/Victoria Cinema that closed around this time (see separate Cinema Treasures entry).

According to the Kinematograph Year Books, the Trevelyan Cinema was operated by Trevelyan Theatres (Dawlish) Ltd. and used a British Thomson Houston(BTH) sound system. The proscenium was 25ft wide, while the screen measured 20ft by 10ft.

The Trevelyan Cinema is last listed in the Kinematograph Year Books in 1959, so it is assumed it closed around that time.

Some sources say that the cinema building was demolished in the 1990’s and the site is now a car park. However, others are less clear on whether the building that was demolished was the hall (which contained the cinema) or the chapel itself.

When I visited, in September 1999, the building I photographed was adjacent to a car park. But I am not sure whether this was the cinema (the hall) or the chapel. It really could be either, but it does look more like a ‘chapel hall’ and the chapel itself.