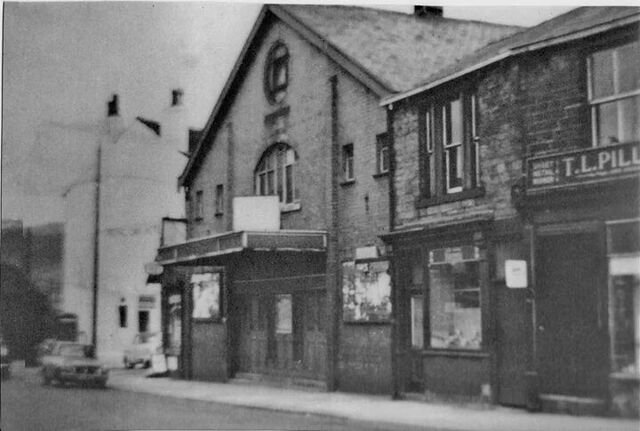 In Littleborough, a small town about three miles to the north east of Rochdale, Lancashire, it is not known when the Queen’s Palace opened.

It is not listed in the 1914 Kinematograph Year Book, but it is in the 1923 edition. By that time, the proprietor was James Barnes, and the manager was W. P. Fortune. There was one show nightly, with two changes of programme each week.

By the 1928 edition the proprietor and manager was J. R. Chapman; by 1932 the owner was Littleborough Picture Theatre Company Ltd.

By 1934 an AWH sound system had been installed. Presumably as part of a general upgrade, the picture house was by then called the Queen’s Cinema.

In the 1935 edition, a seating capacity of 500 is provided. In the early-1940’s the sound system was replaced by one from Western Electric(WE).

By 1956 CinemaScope had been installed, with the necessary alterations reducing the seating capacity to 450. The screen was 19ft by 10ft within a 22ft wide proscenium. There were by now three changes of programme each week.

The final listing in the Kinematograph Year Books is in 1961. It is therefore assumed the Queen’s Cinema closed around that time.

The building was demolished. Face2Face estate agents have occupied the site since at least 2018.