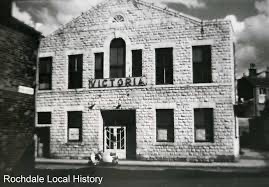 The building closed as the Temperance Hall in 1894 and was offered for auction. In 1910 it was opened as Victoria Billiard Hall; by 1913 it had become the Victoria Picture Palace.

This was not listed in the 1914 Kinematograph Year Book, but it is in the 1923 edition. At that time it was owned by S. J. Fletcher and managed by H. Thompson. There was one show nightly, with three on Saturday, and two changes of programme each week.

By 1934 (and presumably at least a year or so earlier) a British Thomson-Houston(BTH) sound system had been installed.

In the early-1940’s a seating capacity of 650 was recorded; by the end of that decade this had reduced to 550 - and the sound system had been replaced by one from Duosonic. This was itself, later on, replaced by a BA sound system.

CinemaScope was installed in 1957 without, it seems, affecting the seating capacity of 620.

The Victoria Picture Palace closed in 1961. (It maintained its listing in the Kinematograph Year Books until that publication ceased, in 1971, but with only the proprietor’s details being given.)

The building re-opened as a bingo hall. It is now home to the Victoria Snooker Club.