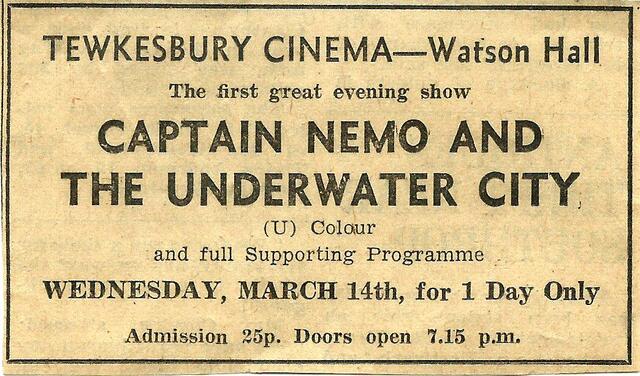 In Tewkesbury, Gloucestershire, possibly as early as 1902, Mr Shakespeare Shenton (who, as indicated by his name, came from a theatrical family) set up a projector and screen in the Philharmonic Hall.

This relatively limited cinema usage, which might well have not been full-time, would not necessarily qualify a building for an entry on Cinema Treasures. However, in this case, an advertisement held in the Cinema Theatre Association Archive, for a screening of the 1969 adventure “Captain Nemo and the Underwater City”, starring Robert Ryan and Chuck Connors, on Wednesday 14th March 1973, at Watson Hall, indicates that it had re-opened for public film shows.

It is not known how long these shows ran for, but presumably they were intended to provide the town with ‘big screen’ entertainment following the closure of the Sabrina Cinema (see separate Cinema Treasures entry) in September 1963.

The Roses Theatre, (see separate Cinema Treasures entry), which includes films as part of its programming, subsequently opened in October 1975. So it is assumed that the shows at Watson Hall ceased, at the latest, at that time.

Watson Hall continues under Tewkesbury Town Council management. Nowadays, the main hall is ideal for concerts and larger events, with a seating capacity of 200 and standing capacity of 400, plus balcony seating for 50.