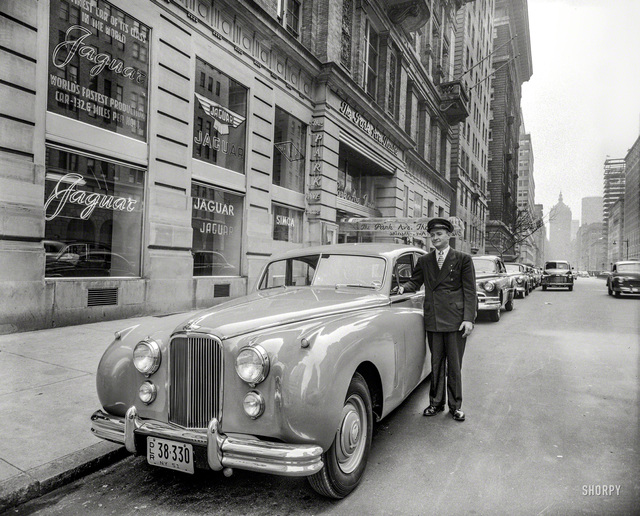 Located on Park Avenue at 59th Street, the Park Avenue Theatre opened in October 1946. It was a project of Walter Reade Theatres, and was designed to cater for the upscale neighborhood. It was a conversion of the former Anderson Art Galleries. The main staircase wall had a mural ‘The Judgement of Mars’ by the noted Belgium artist Oscar Glas. Seating was provided for 350 in the orchestra level, and 125 double ‘love’ seats in a raised mezzanine stadium section at the rear which was for smokers. The downstairs lounge offered facilities for backgammon, gin rummy or bridge, with cards and games provided by the management. The ladies lounge was supervised by a beauty technician, specially trained by Charles of the Ritz. There were no vending machines or sales of any merchandise in the theatre. Tickets were sold on an annual subsciption basis from $52 per year upwards, averaging $1 a week per person per performance. Any un-reserved seats that wewre available for walk-up customers cost 60 cents. The subscription system was abandoned after a year when new operators took over the theatre, and it became a first run showcase cinema for Universal-International Pictures.

The Park Avenue Theatre opened with “Anna and the King of Siam”, and it played the 1948 Laurence Olivier film of “Hamlet” in a run that lasted well over a year. The theatre was equipped with both 35mm and 16mm projection and programs changed twice weekly. It was closed in 1952.

One of the above posts from Warren says this theatre closed on 10/31/52. I have an ad from 10/5/52 and the Park Avenue was playing “The Amazing Monsieur Fabre”. This must have been the last feature played there, or at least one of the last.

Yes, that film with the amazing Pierre Fresnay closed the theater after an eight-week run. Here’s a clip from the NYT 12 Oct. ‘52 announcing the theater’s fate:

The adjoining clip offers an illuminating context. Cinerama had opened two weeks earlier, and already John Ford was champing at the bit to deploy the process “to make the damndest dramatic picture you ever saw.” That portended the end, for a while, of the “small” movie that would have been perfect for the Park Avenue to exhibit (though small movies, in truth, never really went out of fashion in the ensuing revolution). I also like the bit about how, in the event of mechanical failure, Cinerama projectionists would cover the time lapse for repair. I wonder whether anyone at this site experienced such a filler?

In August 1956 the NYT announced plans by Walter Reade to reopen the theatre, an easy reconvert by removing a false floor put in the bank. The theatre is then listed as having 599 seats.

This plan was scrapped when new zoning laws would no longer allow it, hence the sale of the property to the archdioces soon after.

Here is a Time article about the opening in 1946. As Warren pointed out, the subscription idea was a failure:
http://tinyurl.com/y93c7k

There’s a nice photo of a lounge area at the Park Avenue featured in an ad for Gulistan carpeting that appeared in Boxoffice of March 29, 1947. There’s also a small inset photo showing the part of the auditorium with the stairway to the mezzanine.

I was unable to open the photo of the lounge area, but I fondly recall the comfortable lounge areas of the Little Carnegie and the Beekman.

Boxoffice has moved its archive to a new web site. Here is fresh link to the 1949 ad with photo of the lounge.

The 1951 photo of the entrance canopy that Gerald DeLuca linked to is now available at this link.

Found an exterior picture.. next to the Jaguar dealer.. following link is easier to see theatre.. http://www.shorpy.com/node/19419?size=_original#caption