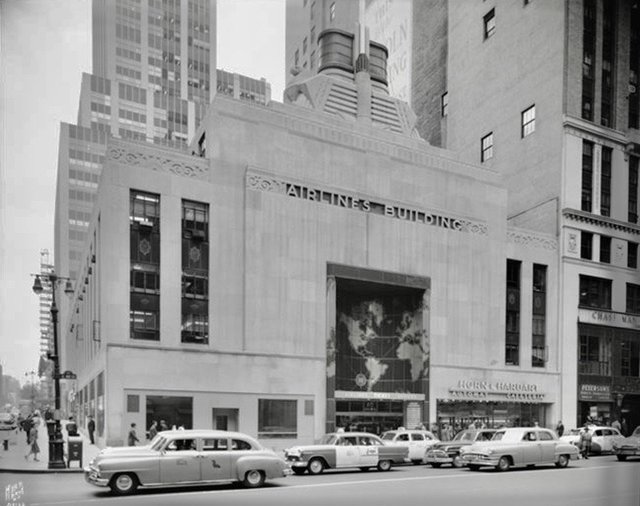 Located at Park Avenue on the south side of E. 42nd Street, across the street from Grand Central Station in the Art Deco style Airlines Building. Opened October 18, 1940 as the Airlines News Theatre, it was renamed Embassy Newsreel Theatre in 1941. This theatre advertised in 1949 its showing of the British film “The Facts of Love”. It was last operated as Brandt’s Murray Hill Theatre.

Could this have been the same place as the Grand Central Theatre which is listed elsewhere?

This is listed as the AIR LINES theatre in the 1942 Film daily Year Book.

The 1943 Film Daily Year Book lists a Newsreel Theatre at 74 E. 42nd street as well as the aforementioned Air Lines theatre at 42nd and Park.

Does anyone know if all three theatres were the same?

The Airlines name makes even more sense now. Seating and location all match although the mailing address was once on 42nd street. This theatre opened on October 18, 1940 as the Airlines Newsreel and had the same publicity agent as the Grand central Newsreel inside the terminal.

From 1949 it was a late run double feature house. In February 1951, after the Loew’s 42nd Street (aka Murray Hill) had closed, this became Brandt’s Murray Hill.

Airlines and Murray Hill should be added as aka names.

Architected by John B. Peterkin as the Airlines Newsreel Theatre – sketch in photos.

By October 1955 it was converted into a Horn & Hardart’s Automat.