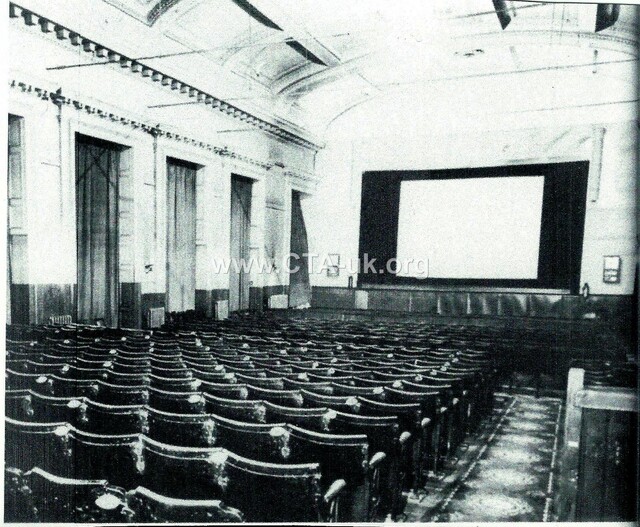 In Wakefield, West Yorkshire, the Corn Exchange was built between 1837-38 and enlarged in 1862. It dominated the top of Westgate, in the city centre, lying between the corner of Queen Street and Market Street.

In 1909 the Wakefield Roller Skating Syndicate opened a rink in the ground floor Exchange Hall, while the first floor saloon was converted into the Electric Theatre. The Mayor, Councillor Hudson, officiated at the opening on 22nd December 1910.

In 1911 the cinema became the Grand Electric Theatre. By 1913 it was advertising a foyer café.

On 16th May 1925 the Exchange Hall, which had become a ballroom after the skating rink had closed, re-opened as a 20-table billiard hall.

In October 1929 the Wakefield Exchange Building Company put the whole building up for sale. It was acquired by cinema promoter Sydney Tolfree and his associates. When the ‘talkies’ arrived, a Western Electric(WE) sound system was installed.

In 1948 the Grand Electric Theatre was acquired by the Newcastle based Essoldo circuit.

In the early morning hours of Monday 16th December 1957 the Grand Electric Theatre was badly damaged by fire. The films showing that week were “The Invisible Man’s Revenge”, starring Jon Hall, and Richard Widmark in “Hell and High Water”.

There was apparently little appetite to restore and re-open the by-now rather old-fashioned cinema and, in 1962, Essoldo sold the Corn Exchange to developers Brador Estates. The building was demolished. Exchange House, a block of flats, with shops at ground floor level, now stands on the site.