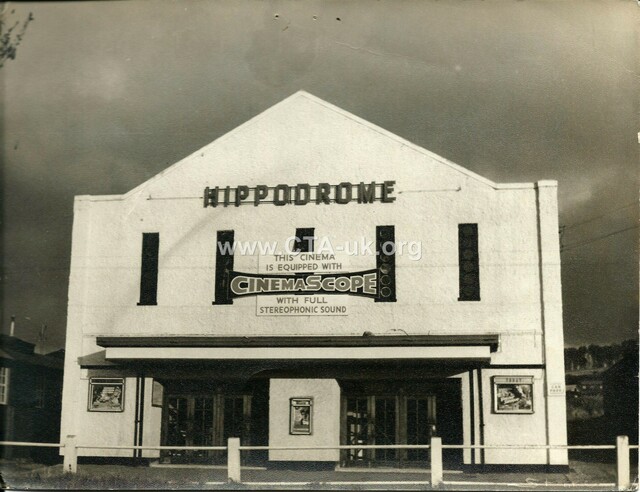 In Tidworth, a garrison town in south-east Wiltshire, on the eastern edge of Salisbury Plain, the Hippodrome Cinema was built during the First World War by Captain A. N. Kendal.

By 1931, the Hippodrome Cinema was owned by A. N. Kendall Ltd., and a Western Electric(WE) sound system had been installed. There were by then 840 seats.

The seating capacity had reduced to 670 by 1954. But then, after a fairly uneventful life, a real-life controversy arose when, in February 1954, the Hippodrome Cinema was sold to the Army Kinema Corporation. The problem was that, although the Hippodrome Cinema continued to show films, ‘civilians’ could no longer attend the shows. This was because the Army Kinema Corporation’s cinemas were exempt from Entertainment Tax, so they could only admit members of the armed forces and their families, and War Department employees and their families. Major-General R. P. L. Ranking, area manager of the Army Kinema Corporation, said he would have been only too pleased to welcome civilians, but simply could not do so.

Undeterred, patrons, the council and the local MP started a “Cinemas for Civilians” campaign, and a petition with over 2,000 signatures was raised. The issue was even raised in the House of Commons in March 1954, and rumbled on until at least March 1955, but the authorities held firm.

By 1959, no doubt to further annoyance from the locals, CinemaScope had been installed. The screen measured 35ft by 11ft, and fitted snugly into a 36ft wide proscenium. This reduced the seating capacity to 653.

With the unrest as a backdrop, the next stage in the Hippodrome’s history needs reporting with no speculation - as it was destroyed by fire on 11th November 1963!